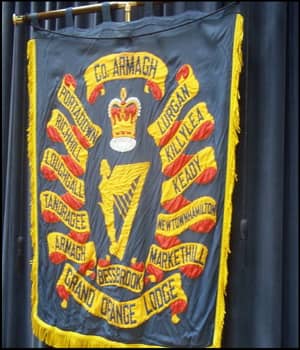 This year’s Co Armagh Twelfth demonstration will be held in Markethill and has been afforded ‘flagship’ status.

In recent years, the County Armagh Twelfth Demonstration has become regarded as the largest gathering of Orangemen on the day and encompasses the full range of the Orange family.  Eleven District Lodges will be on parade, with a total of 154 Private Lodges and almost 5,000 brethren; in addition, ladies from the Women’s Institution will be present, along with several Junior Boys and two Junior Girls Lodges.

Approximately 80 bands of every type will accompany the Lodges and some of the best Pipe, Accordion, Silver and Flute Bands in the country will be on parade.  Also, as the ‘County of the Diamond’ is renowned for the Lambeg Drum, dozens will be accompanying the brethren, especially if the weather is good.

This year the County Armagh Brethren and Sisters will have even more reason to celebrate with the work having commenced in March to renovate and extend the Sloan’s House Museum and Interpretive Centre at Loughgall, where the first Warrants were signed after the Battle of the Diamond in 1795.

There will be two new banners on parade this year, namely those for Cordrain Bible and Crown Defenders LOL 53B, Tandragee District, and Mountnorris True Blues LOL 346, Markethill District.

The County Armagh Twelfth rotates around the Districts in an eleven-year cycle and this year it is the turn of Markethill District LOL No. 10 to host the celebrations.

The District has 12 Private Lodges, with over 460 brethren and 8 bands, including Mullabrack Accordion Band which is celebrating its 30th anniversary this year.

The Markethill brethren are looking forward to hosting the parade for the first time since 2003 and to mark the event, they have produced a special Souvenir ’12th’ book.  The District has been awarded ‘Flagship Twelfth’ status by Grand Lodge for the demonstration and this will certainly enhance the celebrations.

The Lodges of the host District will assemble at the Orange Hall on Main Street at 8.45am and then proceed to the District Memorial Stone in The Square for a short Memorial Service, when 10 local brethren who were murdered during the course of The Troubles will be remembered.

From there, the District will parade back to Main Street, to await the arrival of the first of the visiting Districts from 9.15am onwards.  The main parade, led by Tullyhappy Coronation Accordion Band, is to commence at 9.30am, headed by the County Grand Lodge Officers and visiting brethren.

Markethill District will be followed by Richhill. Killylea, Portadown, Lurgan, Newtownhamilton and Armagh Districts; the remainder of the Districts, namely, Keady, Loughgall, Bessbrook and Tandragee will parade as they arrive, and by 12.30pm, all Districts should be in the Demonstration Field.

The Field is located on the Mowhan Road, and all the usual stalls and food venders will be there, along with church tents selling, tea and sandwiches.  There will be activities for children and as always impromptu band and Lambeg Drum rehearsals.

During the proceedings, a collection will be taken up for the Southern Area Hospice.

The platform proceedings will conclude with the customary Resolution of Thanks, introduced by the Deputy County Grand Master, Wor Bro Joseph Campbell DGMI, who will also present the County Shield for the Best Band on parade.

The return parade is scheduled to leave the Demonstration Field at 3.00pm, with Killylea District LOL No 7 being the first to leave.  The parade route will be Mowhan Road, The Square, Main Street and the County Officers will review the parade at an appropriate point.

Each District will depart at the allocated time and board the buses on the Armagh Road or Newry Road.

Markethill District will be the last to leave the Demonstration Field