The Skip Car Tour set for final fundraiser of the year 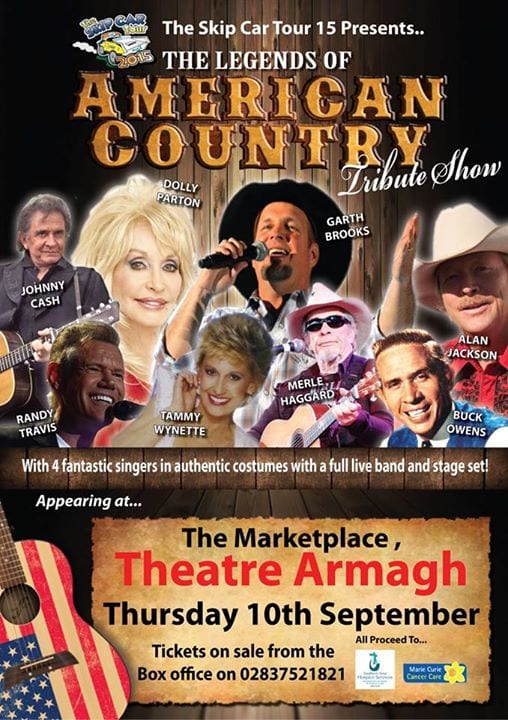 The Skip Car Tour will run its final fundraiser of the year, by inviting the well renowned Legends of American Country Tribute Show stars to perform in the Market Place Theatre and Arts Centre on September 10.

This highly-rated show includes four well- known stars in Evan O Donnell, Joe Moore, Rod and Tracey Mc Auley who between them have a wealth of experience and glittering careers that span over three decades with authentic costume changes and a live six-piece band.

Each singer will perform a string of hits from the featured artist complete with authentic costume changes and in the company of a live six piece band that includes some of Irelands top session musicians making this a must see for all country music fans. A true American Experience. There will also be some fantastic deals available at the Bar & Bistro, with one standout offer being – buckets available for just £10 on the night.

This event will help raise some much needed monies for Marie Curie Cancer Care and the Southern Area Hospice Service. It also comes just three months after The Skip Tour’s committee organised a colossal truck run across the roads of Armagh, and a successful two day festival at Basil Sheils in Tassagh.

Committee Chairperson, Sean McArdle, is thankful for the efforts made by his fellow committee members and to all the contributors that have helped The Skip Car Tour reach some very challenging goals over the past number of years.

“When we first launched The Skip Car Tour we had no idea just how successful it would be. We originally just wanted to make an effort to help some of these groups like Marie Curie Cancer Care and Southern Area Hospice Services, the teams that put absolutely everything into helping others.

“But as the years rolled on, the support just grew and grew, the events just became a greater success. And we were getting a very big bonus, not only were we helping the groups that needed the support, but we were getting to provide fun-filled events for people.

“Which is important because we feel that we owe the public a lot, without their support we simply wouldn’t be able to organise events like this. So it’s essential that they get to have a good time.”

“Successful nights and seeing people enjoy themselves give us great satisfaction. The build up to big events can be tough but no member of the committee ever seems to let the pressure get to them and are always willing take time of the schedules to help. I’m grateful to work with such a dedicated group of people.”

If you wish to find out more information on the American Country Tribute Show, you can do so by visiting The Skip Car Tour page on Facebook.