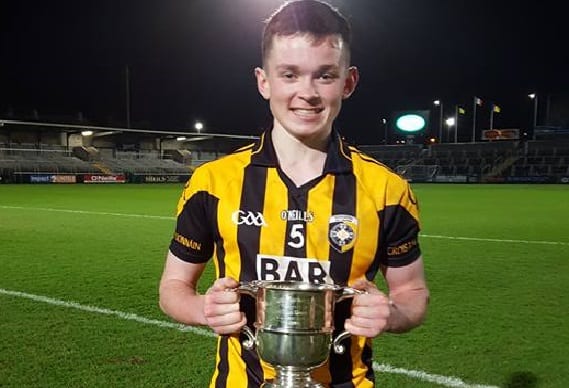 A teenager GAA player battling meningitis has come out of his coma.

Eighteen-year-old Ruairi O’Neill is in the Royal Victoria Hospital where his family have been maintaining a bedside vigil.

He had been described as critically ill.

The teenager – an Armagh county minor player – was a member of the victorious Crossmaglen Rangers side who collected the U21 county title with a win over Silverbridge at the Athletic Grounds just 12 days ago.

He is pictured above with the championship trophy, which will go alongside the minor title he won a few months back. He is also part of the senior setup at the club.

The club had been rallying around behind the family.

Social media has been alight with good wishes and prayers and support for the family.

And this afternoon his beloved Cross’ broke the news on Facebook which we had all been waiting to hear.

“Ruairi has today regained consciousness and is awake and talking,” they posted.

“He is out of danger and will soon move out of ICU. Attaboy Ruairi! #The Toughest!”

Clubs across the country have been remembering Ruiari and nightly prayer vigils have been held.

We are delighted he is making progress and ask you to continue to remember Ruairi and his family at this time.