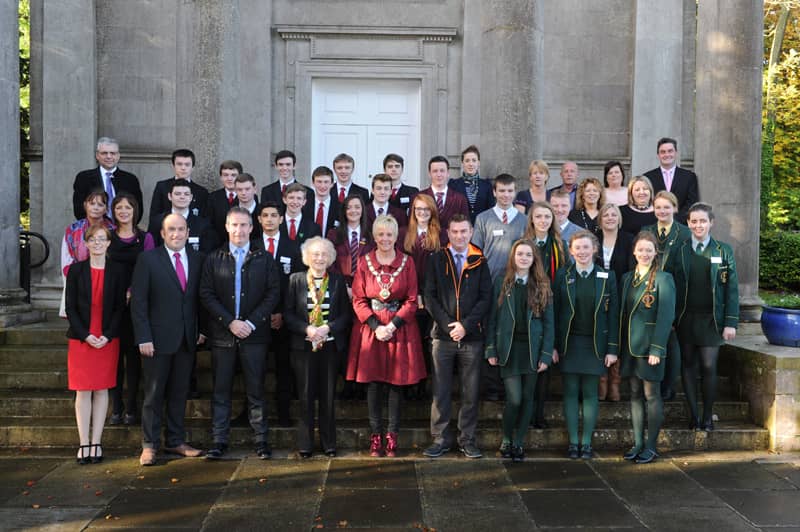 Young people of the City and District took part in an event to mark Local Democracy Week in the Council Chamber on Thursday.

Twenty-four young people from local post primary schools met with Councillors and Officers from Armagh City and District Council to tell them their views on how services and facilities could be improved for young people.

A range of topics were discussed including anti-social behaviour, healthy eating, good relations, Lord Mayoral role and new Council functions. Students were then challenged with scenario questions to consider how they would plan and deliver these services if they held the political reins.

They identified programmes to reduce levels of anti-social behaviour, to support teenagers to become more involved in physical activity, identified opportunities to promote positive relationships between young people throughout the City and District and discussed the priorities for the new Council.

They also provided the Lord Mayor with ideas on how best to ensure a cross section of participation at her final community dinner.

These students did not disappoint and presented to the panel a range of innovative ideas on how to improve and deliver services.

Two students have also been given the opportunity to shadow the Lord Mayor for a day.

Lord Mayor of Armagh Councillor Cathy Rafferty said: “This has been a very enjoyable event and the students have shown great enthusiasm by providing us with their ideas on how to improve Council services and make Armagh City and District a better place for young people to live and study.

“I believe that today’s event has benefited all participants and I know as we enter a new era for local government, there is a great opportunity for the Armagh, Banbridge and Craigavon District Council to incorporate the views of these young people in the development of its services.”

This event was one of many which took place across Northern Ireland to mark Local Democracy Week, which aims to make councils more relevant to young people, dispel apathy and encourage interest in local politics.