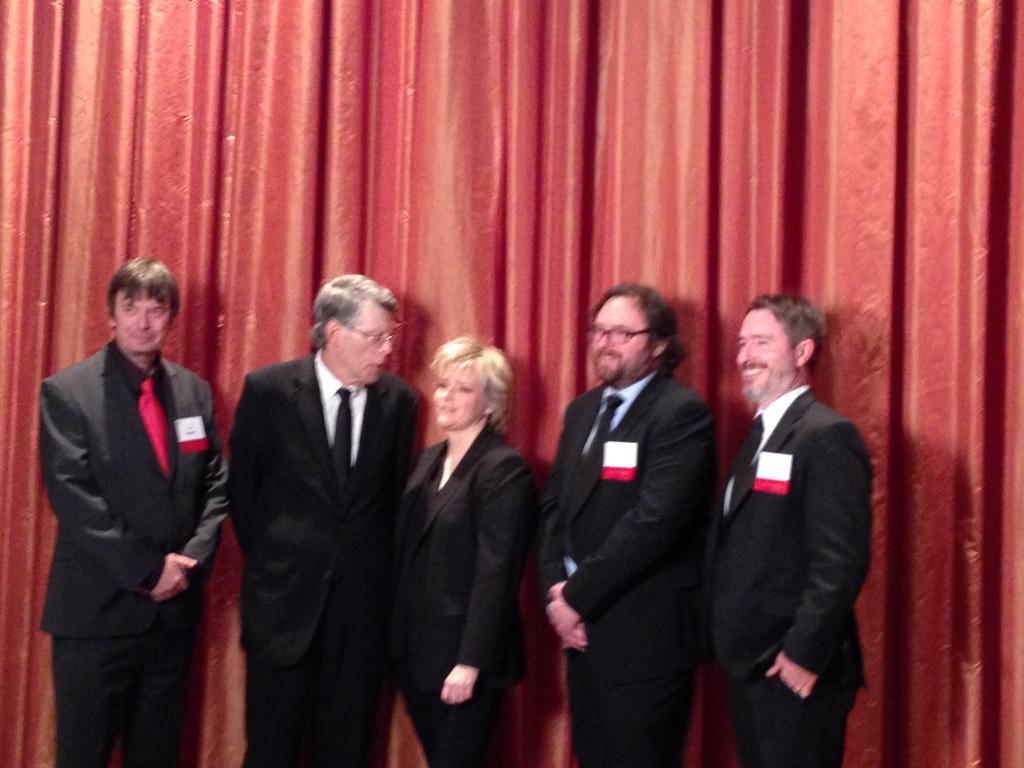 At a glittering, star-studded bash, horror master Stephen King picked up the coveted award, the mystery and thriller world’s equivalent to the Oscars, for his novel ‘Mr Mercedes’.

It was not all disappointment for Stuart, who tweeted a picture of himself and other nominees with veteran horror writer, stating: “I didn’t win the Edgar, but I got to meet Stephen King who was very gracious in tolerating my fawning.”

Stuart flew to New York City but the fact that he missed his flight yesterday (Tuesday) would only serve to add to the nerves.

But thanks to Aer Lingus he was soon sorted and back on course and the big bash to look forward to.

Stuart, who had given himself little chance up against the company in the ‘Best Novel’ category, had earlier announced his pre-flight plans.

Jokingly he tweeted: “Off to NYC this week for the @EdgarAwards. I have my gracious loser face packed and ready.” We don’t think he needed it – to have been in such great company and be shortlisted down to six in this category, from a total of 523 nominees from the literary world’s best, is a fantastic achievement.

The Edgars is one of the world’s most prestigious literary awards.

Stuart Neville’s book ‘The Final Silence’ was one of six named in the category – the big prize on the night for the ‘Edgars’ – named after Edgar Allan Poe, the famed American writer, poet, editor and critic.

Stuart, a former pupil of the Royal School Armagh, lives in Portadown with his wife, who is the acting manager of Tandragee Branch Library.

‘The Final Silence’ is his fifth novel; his first ‘The Twelve’ – released in the United States as ‘The Ghosts of Belfast’ – propelled him on a meteoric literary journey. His fourth book ‘Ratlines’ was a change of direction from the Troubles-rooted fiction for which he has earned millions of fans worldwide, with a journey back in time to 1963 and a plot influenced by the Second World War. It is also in development for the screen as a TV series.

Stuart has built a huge fan base amongst his peers and is a close personal friend of his hero, James Ellroy, the crime noir writer behind such classics as ‘LA Confidential’.

‘The Final Silence’ is a terrifying tale, a rollercoaster ride of what comes to light in the pages of a dead man’s journal, found locked in a house inherited by his niece.

It got its UK release at the No Alibis Book Store in Belfast last July, and then was released Stateside at the end of October, which coincided with a tour of the US.

When the short-list was announced for the Edgars back in January, Stuart took to Twitter to break the good news, tweeting that he was “shocked and delighted” to learn of the honour.

Nominated alongside him for ‘Best Novel’ was one of the world’s biggest ever selling writers, Stephen King (pictured) the man who gave us such modern classics as ‘The Shining’, ‘Carrie’, ‘Misery’, ”Salem’s Lot’, ‘The Shawshank Redemption’ and ‘The Green Mile’.

King was nominated for his book ‘Mr Mercedes’, which also is a change of form to a more crime offering from the horror master, and for which we went on to win.

They were joined in the running by Wiley Cash for ‘The Dark Road to Mercy’, Mo Hayder’s ‘Wolf’, ‘Coptown’ by Karin Slaughter and ‘Saints of the Shadow Bible’ by Ian Rankin.