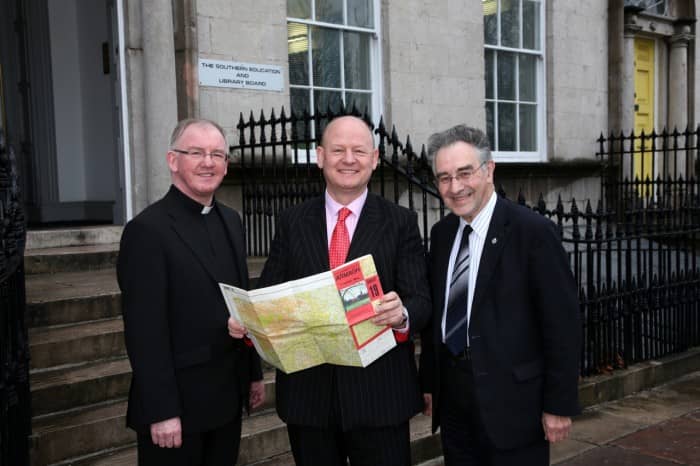 Armagh’s dream of creating one of the first shared education campuses in Northern Ireland took a step closer today (Friday) after a fresh announcement from Education Minister John O’Dowd that he was welcoming applications for funding.

And the move towards the delivery of 10 such campuses in the North has been hailed by the Educational and Community Village Consensus Armagh (ECVCA), Armagh I can reveal.

Education Minister John O’Dowd announced today that his department is welcoming applications for funding to deliver 10 shared education campuses throughout the region, which will be constructed as part of the Executive’s Together Building a United Community initiative, which was launched by the First and Deputy First Ministers in May 2013.

The ECVCA plans to create a network of viable and sustainable schools, with shared teaching and recreational facilities, on a joint site at the heart of Armagh.

Steering group convenor, Bishop Rev Dr Alan Harper, said today (Friday): “We are delighted to hear that the Minister for Education has taken a major step in the delivery of 10 shared education campuses and we are very optimistic that Armagh can benefit from this funding.

“The Educational and Community Village Consensus Armagh was one of the first groups who came together voluntarily with the shared vision of creating a model for co-ordinating educational services and infrastructure that will deliver the best educational outcomes for our children.

“There has been a lot of hard work to bring us where we are today. A group of schools came together from across the education sectors, along with the Southern Regional College and Armagh City and District Council, who believe our young people should benefit from the widest curriculum, best facilities and importantly opportunities to share with their peers from across the community.

“We hope today’s announcement is another step to creating the exemplar of pupil-centred learning in Northern Ireland we are pioneering in Armagh.

“The Educational and Community Village Consensus Armagh is looking forward to the weeks ahead and working together with the aim of being one of the first shared education campuses in Northern Ireland.”

The process began last May, when a group of State and Catholic schools in Armagh announced their intentions to bid.

If successful, the idea would be that there are two new schools, one for Catholic children and another mainly for Protestant children.

The schools would share sports and education resources and it would mean children could be offered a wider range of subjects across the education village.

The  plan proposes a new post-primary building for the area, catering for pupils from the City of Armagh High School and offering a new non-selective choice for parents in the Armagh city and district area. A joint facility would link the Royal School, Armagh, with this new build.

The Southern Regional College (SRC) has endorsed the educational village as a “meaningful partnership with the potential to offer a broad and balanced curriculum to all young people”.

Speaking last May, group spokesman, Bishop Alan Harper, the former Archbishop of Armagh, said: “It is fitting that this vision for sharing and collaboration is planned for Armagh, a city of deep religious significance for both parts of our community.

“Whilst we are an historic city, we are forward-thinking and determined to do our best for our young people. We believe that working together and sharing will secure the best future for the children and young people of the Armagh area.

“This is an opportunity for parents, pupils and stakeholders from across the entire Armagh area to consider the best educational outcomes, consider the arguments and make their support for an ‘educational village’ known through our website.”

Father Kevin Donaghy, principal of St Patrick’s Grammar, said: “Government believes that the shared learning experience is key to the future of education here, and OFMDFM has now called for the creation of 10 shared educational campuses, completed by 2023. We are 10 years ahead of that vision,” he said.

“The ‘educational village’ is one of the most exciting developments in local education and we would urge the maximum level of support from the people of Armagh.”

Picture: Fr Kevin Donaghey, principal of St Patrick’s Grammar School, Mr Paul Crute, Headmaster of the Royal School Armagh. and Mr William Scott, Chair of the Board of Governors of the City of Armagh High School.