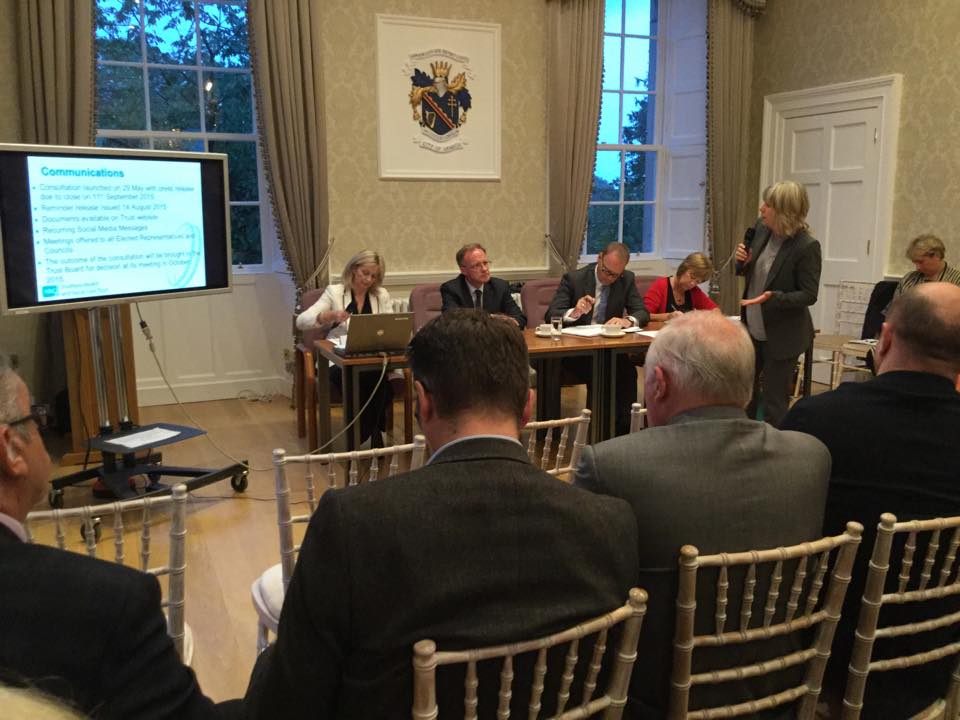 The Southern Health Trust has been accused of being “short-sighted” in its proposal to permanently close the minor injuries unit at Tower Hill in Armagh.

The accusation was levelled at Trust officials during the course of a public meeting at the Palace in Armagh last night (Tuesday).

It came from one elderly gentleman who came along to voice his support for the retention of the facility, which is now facing being closed indefinitely.

The facility had been closed ‘temporarily’ last November and was due to open again in March. The move had been a bid to balance the books for the Trusts as all departments at Stormont were facing financial pressures, none more so than health.

But the MIU in Armagh never reopened and was shortly followed by a proposal to axe it altogether, which is currently out to consultation.

Last night’s meeting saw a turnout of local political representatives, together with members of the Orchard Branch of the trade union Unison and members of the general public.

The man who accused the Trust of being ‘short-sighted’, when the debate was open to the floor, went on to demand the Trust “leave it alone”.

One young mother told those present that the cost and difficulty accessing public transport with an injured to a medical facility in another town – such as Dungannon or Craigavon – was very stressful.

There to hear concerns was Paula Clarke, the interim chief executive of the Southern Health and Social Care Trust, Richard Wright, Southern Trust medical director, and Mary Burke, the Trust’s head of medical and unscheduled care.

Paula Clarke began the meeting – which lasted for two hours – by outlining the consultation document and explaining the reasons for the temporary closure, which included statistics on the attendance at the unit and the impact on neighbouring services.

She also spoke of the need to make best use of the unit’s skilled staff by ensuring they are able to assess and treat as many people as possible.

The concerns raised included the distances people would have to travel to access treatment, the lack of equity with neighbouring towns which have access to hospital A&E, as well as community medical ‘hubs’ in some cases.

The potential for unmet need was discussed with elected representatives, reporting that in some cases older constituents and young families were delaying getting treatment treatment since the temporary closure of the unit.

There was further discussion on the recent news – exclusively revealed by Armagh I – that potentially Armagh may be getting a community heath ‘hub’, and it was questioned if the MIU could remain open until this was in place, but the interim chief executive Paula Clarke made it clear they served different purposes.

One Armagh woman who attended the meeting encouraged people to take a last stand.

Sign the petition to save our Minor Injuries Unit here

She said she was “disappointed at the lack of public support” in terms of numbers and said she had hoped for a bigger attendance.

She told Armagh I: “There were MLAs there but I think Armagh should have a protest as a last ditch attempt to save the service.

“But going by what Paula Clarke said, the maths in my head adds up to closure – although the debate doesn’t close till Friday, September 11.

“I would encourage the public to write to either the council, the Trust or Craigavon Hospital chief executive – they will want to here from all Armachians, so get writing everyone now when we can have a say before it’s too late.”

She added: “You have to see the whole picture. There is nursing staff sitting round and if I was there and spent years training I would get deflated and not want to be there. The big question that needs to be asked: ‘Why are people not availing of the service and where are they going?'”

A spokesperson for the Orchard Branch of Unison told Armagh I the meeting she believed the meeting “went well”.

She told Armagh I: “There was a good turnout from elected representatives, unions and the general public, all of whom expressed their concerns over the potential closure of the minor injuries unit, which would leave Armagh with no access to emergency medical treatment outside of the GP service.

“The general feeling of the meeting was that the MIU served a purpose to the people of Armagh and district and the Trust should keep the unit open.”

The meeting ended with a reminder that the consultation period finishes on September 11 and consultation papers must be completed and sent to The Southern Health and Social Care Trust before that date.