The dog, which had given birth to multiple litters, was in terrible condition – visibly frightened, unwell and in considerable pain 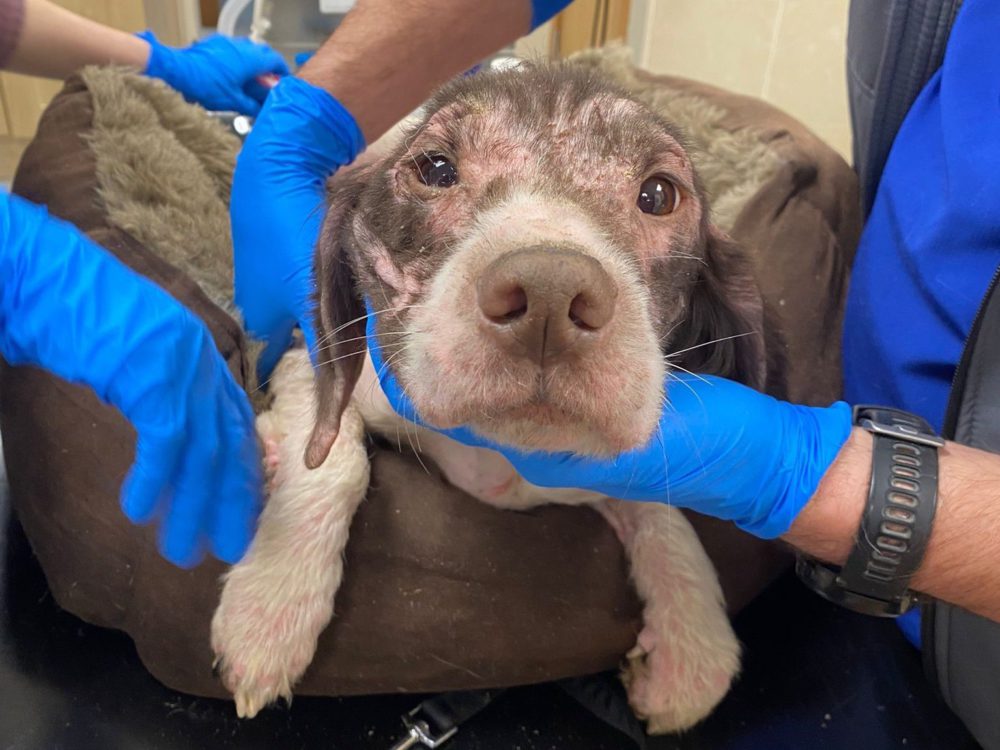 A suspected puppy farm dog – a victim of what the USPCA describes as a “really severe case of animal neglect and exploitation” – has been found dumped in a ditch in Forkhill.

And the Northern Ireland animal welfare charity is renewing its call for more effective enforcement and regulation against illegal breeders, whilst appealing for information following this “distressing case brought through its doors last week”.

The suspected puppy farm dog was found by a member of the public, deserted in a ditch in the Longfield Road area of Forkhill.

The dog, which had given birth to multiple litters, was in terrible condition – visibly frightened, unwell and in considerable pain.

The dog was so severely neglected that it was difficult for the USPCA veterinary team to establish its specific breed, but it was thought to be a spaniel type dog.

USPCA Chief Executive, Brendan Mullan, said: “This was a truly horrible and distressing case of animal cruelty and neglect, and we condemn the actions of those responsible for treating an animal this way. Her condition and the manner in which she was abandoned leads us to believe that she was a former puppy farm dog. “Following a spate of abandoned puppies and terrible cases of animal cruelty in recent months, this case is yet another example of why Northern Ireland urgently needs better enforcement and regulation to clamp down on these illegal breeders.

“MLA Robin Newton’s private members bill, the Welfare of Animals (Breeding and Sale of Puppies) Bill (#Lucy’s Law for NI) presents the opportunity for immediate action – firstly, to offer greater protections for the animals being exploited in this cruel trade, and secondly, to ensure those responsible are held accountable and face the full force of the law for their actions.

“Frustratingly, this bill is yet to be given a date to be presented to the Assembly. Time is short in this mandate, and we call on the Bills Office to recognise the scale and seriousness of the problem. Otherwise, we are left with months of further pain and suffering for these animals.

“Keeping a dog in such poor conditions is one thing but to then abandon her at a roadside when she was obviously so unwell is unforgivable.

“We are asking members of the public with any information around this incident to please come forward and contact the USPCA on 028 3025 1000.”

MLA Robin Newton said: “This is yet another dreadful example of dogs and pups being used and abused only for huge profits.

Following veterinary assessment, the dog was diagnosed with severe mange and a serious bacterial skin infection which made her breed nearly indistinguishable.

She also suffered from a huge abdominal tumour and was in a great deal of pain, so the USPCA veterinary team was left with no option other than to relieve her of her suffering and put her to sleep. Mr Mullan added: “The more we see demand for young pups, the more this appalling industry grows.  We are pleading with the public to rehome a dog from their local animal shelter and avoid illegal breeders at all costs – the individuals involved have no regard for animal welfare and are only interested in lining their pockets.

“This dog was so visibly ill but was being exploited over and over by her owners for profit – when she was no longer of use, she was left to die by herself.

“This case highlights the disturbing reality of the puppy farming industry, and we just don’t know where the horrific and tragic outcomes will ever end without action from our government.

“We urge the Bills Office to ensure the Breeding and Sale of Puppies Bill reaches the floor of the Assembly in this mandate. There must be consequences for the perpetrators of this despicable cruelty.”