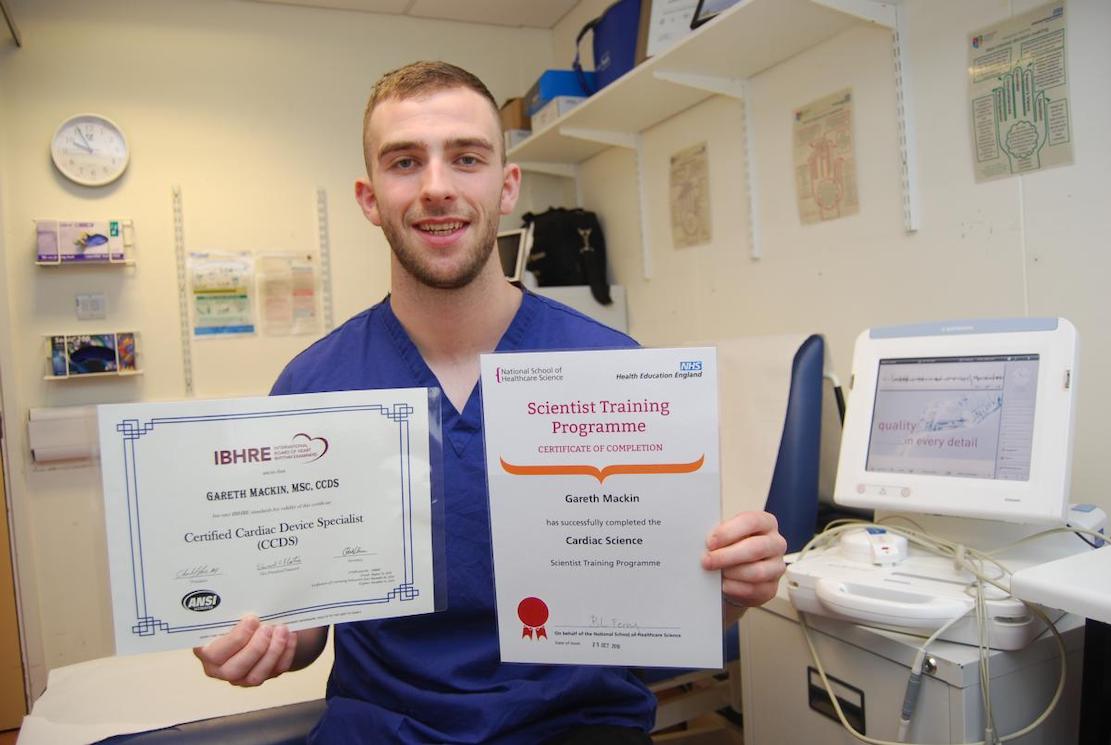 A south Armagh cardiac physiologist has graduated with the highest score in the UK for one exam – and scored in the top 1% in the world in another.

Gareth Mackin, who is originally from Cullyhanna, has graduated with the highest score in the UK in the Cardiac Scientist Training Program of 2019 and scored in the top 1% in the world for the Allied Professional Certified Cardiac Device Specialist (CCDS) exams held by the International Board of Heart Rhythm Exams (IBHRE).

The 25-year-old is currently working as a Cardiac Physiologist in Kettering General Hospital’s Cardiac Investigations Department for the last three years.

He supports the diagnosis and treatment of a range of heart conditions using specialised arrhythmia analysis, pacemakers and implantable cardioverter defibrillators, implantation of loop recorders, echocardiograms, angiograms and other cardiac procedures.

He said: “About 6,000 people applied to join the highly competitive Scientist Training Programme and about 26 of us were picked to take part through a Cardiac Science Master’s degree at Manchester Metropolitan University.

“I was absolutely delighted when I found out I had achieved the highest score in the UK for the program. I received the news on the morning of my final examinations and it gave me a great boost going into those exams.

“It will mean I become a Cardiac Scientist registered with the Health and Care Professions Council and will be able to perform a wider variety of investigations for cardiology patients including cardiac resynchronisation therapies, implantable defibrillation therapies and electrophysiological studies.

“I have also been contacted after doing by the IBRHE to become an Ambassador for them. This will mean I will attend national conferences and similar events and highlight to colleagues the advantages of the undertaking the accreditation.

“I am very pleased to have done so well at both exams and I want to thank Leanne Kelly, Senior Chief Cardiac Physiologist, and all my colleagues at KGH who have done so much to support me and who gave me invaluable on the job training as I was studying.”

During his three years at KGH Gareth’s Master’s degree programme has been sponsored by the National School of Healthcare Science and he is now a qualified Cardiac Scientist regulated by the Health and Care Professions Council (HCPC).

This has involved completing an extensive logbook of competencies, coursework and both written and practical examinations with the National School of Health Care Science’s Scientist Training Programme – a qualification which amounts to professional registration with HCPC.

Principal Cardiac Physiologist Sean Thuis, who runs the department, said: “Gareth is the first Cardiac Clinical Scientist to train and qualify at KGH, and has set the bar very high.

“We are training three more Scientists across both Cardiology and Respiratory as part of our continued commitment to deliver a very high level of care to our patients.

“Cardiac Physiology is a little known but vital part of every hospital’s workforce – Gareth’s achievement helps to highlight this important and rewarding career choice to future Scientists.”