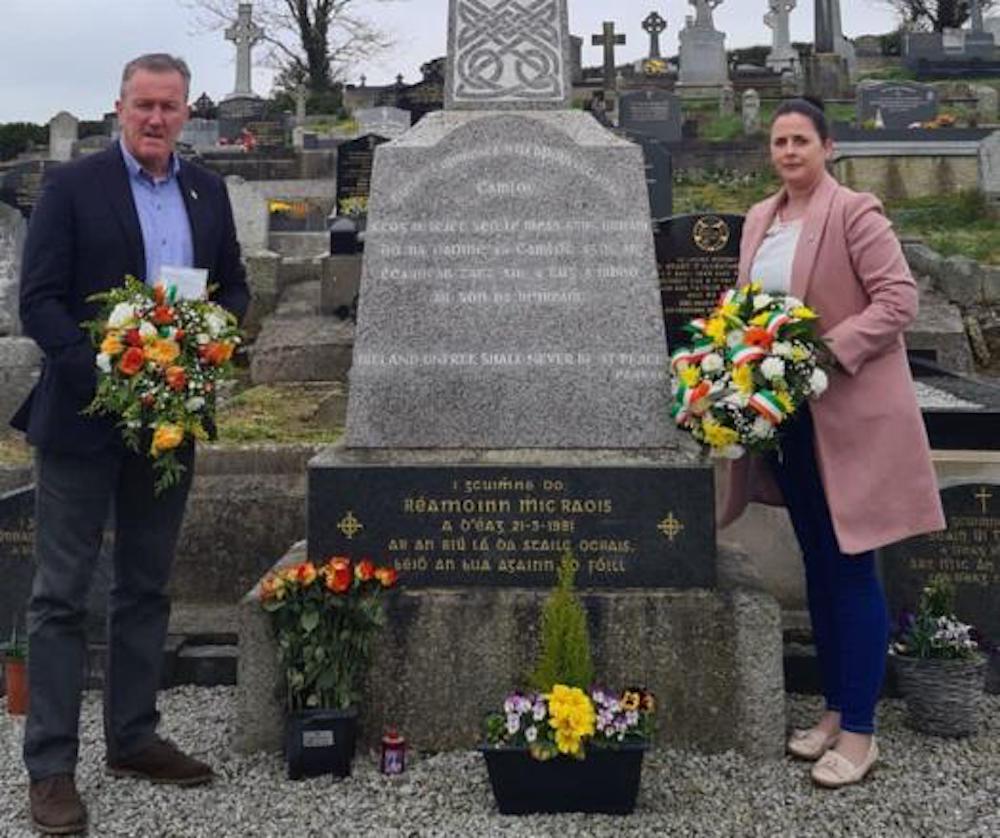 Newry and Armagh MLA Conor Murphy, speaking as Republicans commemorated the Easter Rising of 1916, has said that Irish Unity was now the “big idea of our time” and “just as partition has stunted the development of our people and island, unity can unlock their potential”.

Sinn Féin, for the second year due to the ongoing pandemic situation and public health restrictions, held all commemorations online.

In many graveyards throughout the area, wreaths were laid by individuals at the gravesides of those members of the Republican movement who had paid the supreme sacrifice in the fight for Irish freedom.

Reflecting on what the Easter period meant to Republicans, Mr Murphy said: “Easter is a time when we Republicans remember our patriot dead, the generations that gave their all, to build an Irish Republic.

“At Easter we remember all those who gave their lives in the pursuit of Irish freedom and independence. We extend solidarity to their families and friends.”

The senior Sinn Féin politician continued: “This year marks a number of significant anniversaries that merit acknowledging. Fifty years ago, in 1971, the British introduced internment without trial, targeted at the nationalist and republican community.

“Forty years ago, the men and women of the H-Blocks of Long Kesh and Armagh Gaol embarked on a heroic hunger strike that would shake the political establishment to their core.”

Speaking about the impact of a hundred years of partition on Ireland, the elected representative said: “The entire island has suffered as a result of partition.

“It is beyond question that partition – the forced division of our island and people – has had a devastating impact on our community and country.

“The 100th anniversary of the division of Ireland affords us the opportunity to reflect on that and, crucially, look to the future.

“We are in the midst of a decade of opportunity. It is not an exaggeration to state that the debate on Irish unity has reached new and exciting levels.

“It is now in the mainstream and no matter how hard political unionism and regressive elements in Fine Gael and Fianna Fáil try – it’s not going to be wished away.

“Irish unity is the big idea of our time. Just as partition has stunted the development of our people and island, unity can unlock their potential.

“We also know a united Ireland will automatically re-join the EU – reversing the devastation of Brexit”.

The MLA said it was time to plan for reunification.

“We are seeing an almost daily intervention on the subject of unity – from a wide and diverse range of people.
Community leaders, economists, celebrities, academics and elected representatives are all having their say.

“What we need to do now is plan. The government in Dublin has an obligation to support citizen led planning for reunification. They must establish an all-island Citizens’ Assembly to plan for our future – a better future for everyone who calls this island home.”

And he urged: “Let us use Easter to commit ourselves to building a new and united Ireland. A Ireland for all our people

“A new and united Ireland, must be about more than adding the north to the south. It is not a 32 county free state. It is a new republic. The republic of Tone and Connolly, Markievicz and Farrell, Sands and McGuinness.

“The challenge for us, for this generation of republicans is how we shape that change, how we build a new and united Ireland.

“An Ireland of prosperity and opportunity. An Ireland of equal rights in which everyone has a place. An Ireland that provides jobs, homes and health care for its citizens.

“An Ireland that promises security of a roof over your head and fair pay for a fair day’s work.”

Concluding his reflections the Sinn Féin Newry and Armagh MLA said: “As we remember today the generations of Irishmen and Irishwomen who paid the supreme sacrifice for the noble cause of Irish freedom, let us be clear – a united Ireland and a real republic is the only fitting monument to their memory.

“And let us be equally clear that the Irish republicans of 2021 are as determined to achieve those objectives as were those whom we honour today.”