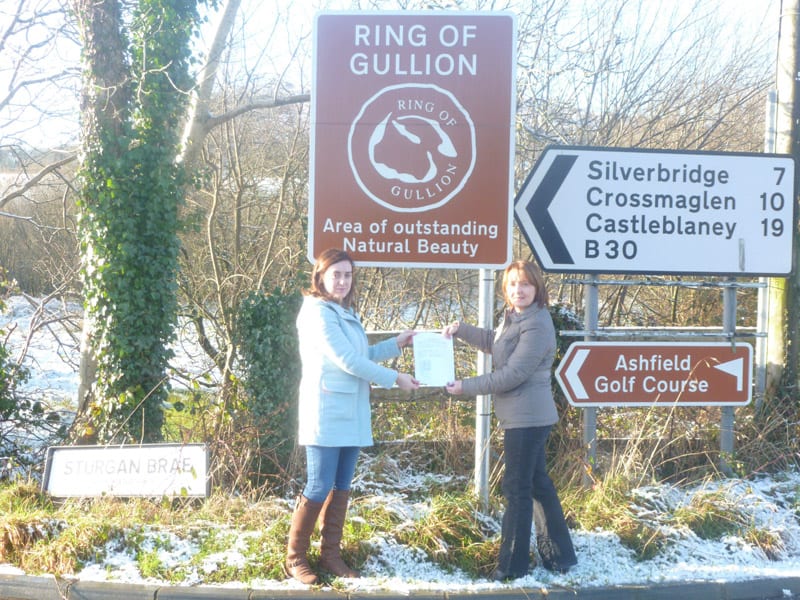 Letters objecting to the name of Newry, Mourne and Down for the new super-council covering South Armagh have been handed over to senior council officials.

More than 120 businesses and community groups have signed the letters and called for the council to reverse the decision.

Sinn Féin have confirmed that they have challenged the recent decision to name the new council Newry, Mourne and Down – which was chosen after an expenditure of £30,000.

Commenting after an official objection was lodged through what is known as the ‘call in procedure’, south Armagh Councillor Roisin Mulgrew said: “There is a huge backlash to the decision taken by the SDLP/Unionist voting bloc to exclude the entire south Armagh area from the name.

“Many local businesses, community and voluntary groups and individual residents have contacted me and my colleagues to register in the strongest terms their anger at this council name which has totally excluded south Armagh.

“The South Armagh Chamber of Commerce has initiated a campaign to have this name changed and Sinn Féin will support them and all others who are working to challenge this decision.”

Councillor Mulgrew said there was “grave disappointment” that her party’s proposal of Newry City, Mourne and Gullion had not been accepted.

“All Sinn Féin elected representatives from across the new council area supported the Newry City, Mourne and Gullion proposal,” she added.

“We felt that this name reflected the entire region that we serve and also gave recognition to Newry as the principal city. There is no rhyme nor reason as to why in particular the SDLP have deliberately snubbed our area.

“The ratepayers of south Armagh should be included in the new name as of right not of privilege.”

The Councillor also handed into senior council officials, letters objecting to the new name signed by over 120 business and community groups.

Newry and Armagh MLA Megan Fearon, pledging her full support for the campaign by her colleagues to challenge the naming decision, said: “This decision will adversely affect this area.

“Those who live here, work here, invested in and promoted this area are rightly angry. South Armagh has once again been cast aside.

“Gullion has been a success story in terms of tourism and our name included the two areas of outstanding beauty which the new council hoped to build on.

“Another example of the necessity to include south Armagh is the Mourne, Gullion Cooley Geo Tourism Project, a major project which highlights the rich cultural heritage and landscape of the region.

“The exclusion of an entire region of this new council area has detached and isolated many who day and daily are working to ensure its wellbeing and sustainability.”

Section 41 (1) of the local Government Act 2014 provides that a decision of the Council or one of its Committees can be called in for reconsideration if at least 15% (7 Members) request it.

Sinn Féin have lodged the objection on the grounds that this decision to name the Council Newry Mourne and Down has “adversely affected a large section of their residents of the district (Community Impact Grounds)”.

Pictured: Megan Fearon MLA & Cllr Roisin Mulgrew pictured with letters of objections to the new Council name signed by over 120 Business and Community representatives which was handed into senior Council Officers.