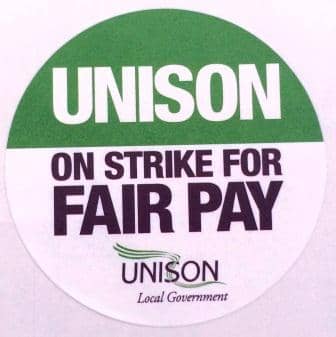 UNISON’s local government and school support workers in Northern Ireland, England and Wales are set to hold a second day of strike action on Tuesday, September 30.

The announcement today (Wednesday) follows the strike on July 10, which saw around a million public service workers walk out in an increasingly bitter dispute over pay.

The union is calling on the Local Government Association to engage in further talks to resolve this year’s pay dispute.

The strike action by public sector workers, including various trade unions, including NIPSA, saw pickets and protests held outside the Southern Education and Library Board headquarters on the Mall in Armagh and at the entrance to the Palace Demesne, the headquarters of Armagh City and District Council.

UNISON says the current offer would see 90% of local government and school support workers receive a mere 1% increase, on the back of three successive years of pay freezes and below inflation rises in 2013 and 2014.

Pay has declined by 18% since 2010 and most councils have also imposed severe cuts on conditions such as unsocial hours payments, it adds.

“The strike on 10 July sent a strong message to the employers that local government and school support workers are fed up and angry with being exploited,” commented UNISON Northern Ireland regional organiser Brian Ferguson.

“It is a disgrace that so many workers and their families are forced to live on poverty pay.

“There was widespread public support for our members, the majority of whom are low paid and part-time women workers whose good will has been taken for granted for too long.

“Despite four years of vicious government cuts, they continue to educate and support children in schools, maintain crucial local services, keep our communities clean and safe places to live and protect the homeless and vulnerable.

“No local government or school support worker should be paid below the living wage. It’s time for the employers to come back to the negotiating table and work with us to secure a decent offer for our members and end this damaging dispute.”