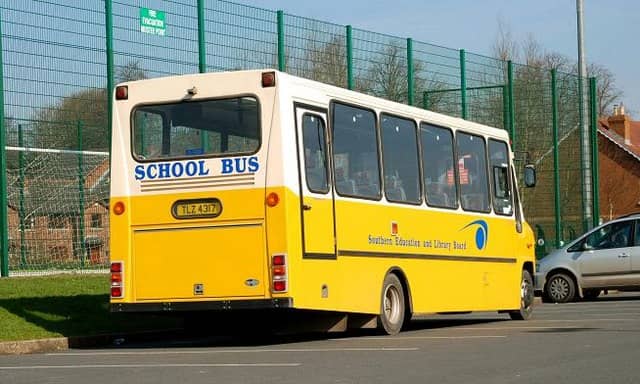 A MASSIVE cut in local school bus provision spending of £1.2 million will leave many families across Armagh with dire dilemmas and struggling to cope, it has been claimed.

Parents of children attending some schools in the South Armagh area have already been told that the buck for ensuring their safe passage is to pass swiftly into their lap.

The claims have been made by local SDLP Councillor Thomas O’Hanlon, who said school bus routes across the Crossmore Ward are being withdrawn completely by the SELB, as the Department of Education had imposed £1.2 million cutback on its transport budget.

He made his comments to Armagh I tonight (Thursday), after holding a meeting earlier today with senior transport officials at the SELB’s headquarters on the Mall.

Mr O’Hanlon says families will be left struggling to cope with the need to get children to school and work and other commitments.

He also claims a paltry payout of just £1 a day may be offered to families to compensate and aid their efforts in getting children to school when the transport rug is whipped out from under their feet.

The irate SDLP man said: “This morning we were made aware of the very real impact of the Minister’s decision to cut £5 millon from the school transport budge across the north, which will see £1.2 millon slashed from the SELB’s budget locally.”

Already this week, many parents with children attending Our Lady’s and St Mochua’s Primary in Derrynoose, St Mary’s Primary School, Granemore, and at St Patrick’s High in Keady have received notification that their school bus service is to end or that they have to make their way to alternative collection points, some as far as two miles away.

Explained Councillor O’Hanlon: “Many of those concerned are what the SELB determine as concessionary fares, but there are also many who should be provided with transport to school.

“Those who are entitled to school transport are being offered transport assistance which in essence allows parents to reclaim a set amount to cover the cost of their journey. This will average out at about £1 per household, per day, no matter how many children from that household currently attend the particular school.”

Our Lady’s and St Mochua’s in Derrynoose appears to be the worst hit locally, with 32 pupils affected.

And Mr O’Hanlon went on: “Whilst I accept most of these children are concessionary fares, the impact of this decision will leave many parents having to make alternative arrangements come September.  Many working parents depend on the school transport, as it allows children to get to and from school whilst parents are at work.”

The situation is not much better for St Patrick’s High in nearby Keady.

“Many pupils attending St Patrick’s in the Clea, Upper Darkley and Cargaclogher Roads can either make their way to the Castleblaney Road, which for some is two miles away, or make their way to Keady by whatever means,” added Councillor O’Hanlon.

“This decision is going to have a devastating impact on families and it will also have an impact on the private bus operators who depend on the contacts for many of these services for their work and, indeed, their livelihoods.

“I cannot understand the decision to slash the budgets for school transport as, whilst transport costs and fuel costs continue to rise, the Minister cuts funding. It just doesn’t make sense.”

Do you have a child attending any of these schools? Have you been told to find an alternative to school transport? Tell Armagh I what you think of these latest plans…