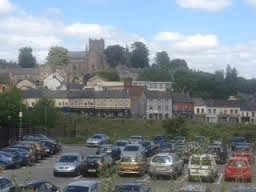 The long derelict site at Ogle Street in Armagh could be about to be redeveloped following confirmation that a sale has been agreed, Armagh I can exclusively reveal.

The site has been left undeveloped and overgrown since the illegal demolition of a row of 18th Century properties back in November 1997.

There was outcry after the demolition work, which led to a consortium of local businessmen being fined.

There have been many attempts and suggestions since then that Ogle Street would be brought back into productive use but nothing has ever materialised.

Now Armagh I can reveal that a sale for the land has been agreed.

The site comprises 1.47 acres with frontage on to Ogle Street and a public car park to the rear.

The land falls within the development limit of Armagh city centre and full planning permission was given on February 8, 2011 for a mixed use development, consisting of 13 retail outlets and 70 residential units. The approval also covered curtilage parking and turning facilities.

In 2002, the site in Ogle Street, which is the birthplace of St Malachy, had been bought by the same company which was responsible for bringing the Spires Retail Park to Armagh. Jermon Developments had intended to purchase the former Bennetts Newsagents also, with a view to carrying out commercial development on both sites.

A Co Down developer later brought forward plans for the site but again no work proceeded and there had been no further movement until last January when the site was placed on the open market.

For the past 17 years, the lack of progress has been the cause for much concern, with local councillors arguing that it had been allowed to go to rack and ruin and become an overgrown eyesore and dumping ground.

‘Fake’ shop fronts have been erected to try and improve its appearance in such a prime city centre location.

Now it is hoped that Armagh might begin to see movement.

Armagh I can reveal that paper work came through on Friday and the sale has “more or less” been agreed, according to TDK Commercial Property Consultants, who are dealing with the site’s sale.

But they were unable to confirm to Armagh I the identity of the buyer or the site’s intended purpose, although it would now seem highly likely that, with approval for retail and residential accommodation already in place, some form of redevelopment will take place in the not too distant future.