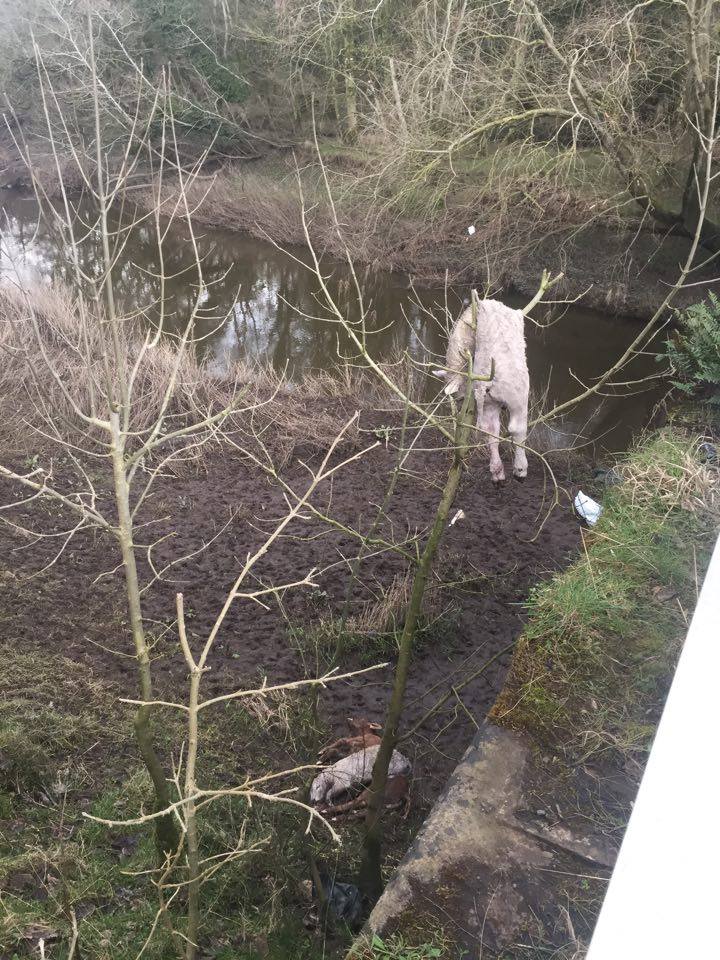 These shocking images display the new depths to which illegal dumpers will stoop.

A dead calf – casually thrown from a bridge – hangs in a tree for motorists and walkers alike to see.

In this beautiful area of County Armagh, close to the border with County Monaghan, illegal dumping has long been a problem.

But this was the sight which greeted local resident Melannie Edmondson as she went for a run this afternoon.

She told Armagh I she had been “horrified” at the sights which she was met with as she passed along the Cor Road at Tynan.

The calf appears to have been pitched off the bridge and, instead of landing below, now hangs there in full view for passersby.

Look below and nearby and it is evident this is a much deeper issue.

Said Melannie: “There are two other calves to the left and a black one to the right of the picture, along with a couple of filled bags which I was afraid to look in.

“The Lidl bag and that area seems to be household rubbish and this part of the road is a usual dumping ground for that type of rubbish. The red sheet seems to be a single bed sheet, against just hanging in a tree.

“The whole road is ALWAYS littered.

“Then my husband has told there is a drinks chiller dumped on another lane in Tynan plus, where the Coolkill Road meets the Cor Road, a carpet along with other rubbish has been dumped.”

These latest disgraceful incidents of dumping have been reported to Armagh City, Banbridge and Craigavon Borough Council.

Melannie spoke to Armagh I in the hope of highlighting the ongoing problems and has called on anyone involved to simply stop.

“This road always has had litter problems but at the minute it is extreme!” she added.

“I took three photos but I could have taken 300 more.

“This is a link road between the north and south of Ireland, a road tourists and locals use and it is a disgrace.

“I don’t want to point the finger at any individuals but these photos show what so called ‘humans’ do. Shame on them.