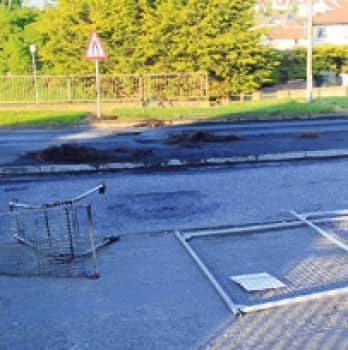 For over 40 years now ‘The Tunnel’ at the Ring Road in Armagh has been a bone of contention, particularly for the residents of this area, a magnet for anti-social behaviour usually associated with drinking.

But now Armagh I can reveal that it looks set to be redeveloped and closed off fully to prevent any further anti-social behaviour.

Sinn Fein have been leading the initiative through their dedicated role on the Neighbourhood Renewal Sub-Group and this work is about to pay dividends.

Councillor Cathy Rafferty told Armagh I today (Monday): “Community activists along with elected representatives have campaigned for many years to have this situation addressed. Credit is due to local elected representative from the area for their attendance at numerous site meetings presenting residents’ concerns to council, statutory bodies and the relevant ministers.

“Finally it can be reported that there are some positive developments. The redevelopment will be in three stages.

“The first stage will involve the alley-gating at the back of homes in Niall’s Crescent, allowing key holder access. This has been completed.

“Stage two will see the abandonment of the steps leading down to the tunnel. An application has been drafted and upon its approval all consultation should be completed by June.

“This is a pre-requisite for redeveloping this part of the site, which in reality has been the gathering point for much of the anti-social disturbances suffered by residents.

“Stage three will see the re-imaging of the area. This will see community involvement and a steering group will be established. A funding application will be made to implement the outcome of community consultation. This is expected to be  submitted in June/July.

“In addition, it is good to note that local group SPRING were successful in drawing down £62,000 from the Neighbourhood Renewal Partnership Board.

“This money will be used as part of a youth intervention programme based in the area. Although not specifically tied into the tunnel redevelopment, it is hoped it will have a positive impact in the area.”