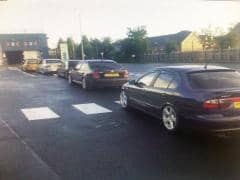 Police in Armagh joined with Driver Vehicle Agency (DVA) to conduct a road safety operation in Armagh on Saturday following complaints from the public about anti-social driving in the city.
The aim, say police, was to detect illegal or unroadworthy taxis and buses, unsafe and unroadworthy cars and motorcycles, and motoring offences in general.
The operation ran from 8pm until 1am  and DVA staff opened the MOT Centre so that vehicles could be checked.
Police and DVA Enforcement Officers visited Lonsdale Road car park where two cars with  suspected defects were  immediately stopped and sent straight to the MOT  Centre for inspection. During the course of the evening a number of vehicles were checked and found to have defects. Two suspected illegal taxis were among this number and were both found to be defective.
Sergeant John Downey, Armagh Response, said: “This was a very successful operation and sends out a clear message that police and DVA will work together to improve road safety and prevent defective vehicles being driven on our roads.
“This partnership approach allows us to bring together a range of different skills, knowledge and legal powers to make the maximum amount of detections.
“Our aim in carrying out these operations is to keep people safe on the roads and to reduce the number of people killed or seriously injured on our roads.
“The responsibility is on motorists to ensure their vehicles are roadworthy and comply with current legislation. In addition to fixed penalty notices and referral to the Public Prosecution Service, police also have the power to request a preliminary breath test from a driver if an offence is committed.
“We will continue to work with DVA and plan to conduct similar road safety operations in the near future. We will continue to do everything in our power to make the roads safer for everyone.”
Guidance: In total 17 vehicles were checked with 16 of them having defects. The defects included: no handbrake, no exhaust silencer, defective tyres, broken springs, defective lights and lowered suspension.
The following were issued to the motorists by DVA staff and PSNI at the Test Centre:
9 Prohibition  Notices (14 days to have defects rectified and them return to MOT centre for  inspection)
4 Defect Notices issued
8 Suspension of  Vehicle Test Certificates
10 Fixed Penalty  Notices
4 production of documents issued
4 vehicle retrifications issued
1 Report File for No Insurance
1 Report File for No Insurance and fraud
1 Report File for Taxi Operator Licensing Offences – ie Fraudulent Use of Reg mark,  Fraudulent Use of PSV Plate, Fraudulent Use of Road Fund Licence, No Taxi Driver’s Licence, No Taxi Operator’s Licence, No Road Fund Licence, two defective tyres and defective handbrake.