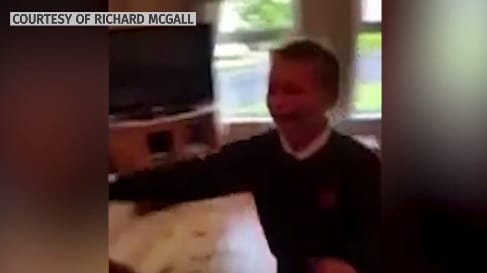 Ten-year-old Zak McGall gets the surprise of his life when he opens his present – tickets to see #NIR at #Euro2016https://t.co/eGCS8lHQKY

The reaction is priceless.

Ten-year-old Zak McGall received Northern Ireland tickets for the game against Ukraine which the Green and White Army won 2-0.

Michael O’Neill’s side sit third in Group C following their opening two matches, but look likely to qualify as one of the best third-place teams even if they lose to Germany.

Little Zak was given tickets to the clash against Ukraine by his father the day before the game in Lyon.

His reaction though. Absolutely brilliant.

Despite his tender 10 years, he still understands the gravity of Northern Ireland’s first major tournament in more than three decades.

Zak even got a FaceTime call from some of the squad, including striker Kyle Lafferty.

Talk about a birthday to remember!