Promises of further plans to improve area around River Bann 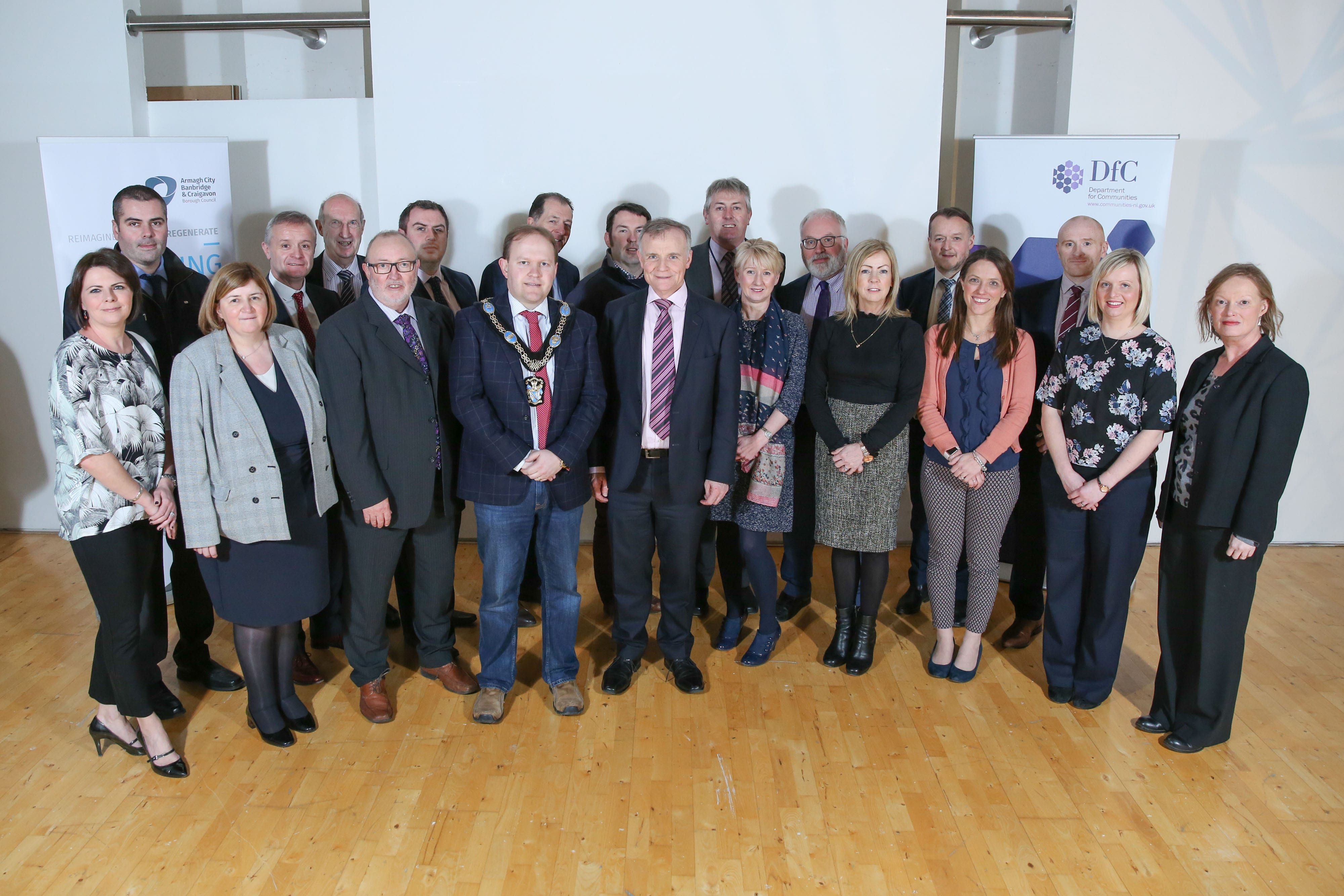 Lord Mayor Alderman Gareth Wilson along with the Permanent Secretary of DfC, Leo O’Reilly and a delegation from council, the DfC, Portadown Chamber of Commerce, representatives from the project consultant and contractor teams and elected members came together last week to celebrate the completion of these significant regeneration projects in the Portadown area.

A special event has been held in Portadown to mark the completion of multi-million improvement schemes in Portadown.

And it has also brought assures and pledges of further improvements to be carried out along the River Bann.

To mark the completion of the Portadown linkages public realm scheme – and the regeneration of Portadown Pump House – Lord Mayor Gareth Wilson welcomed the Permanent Secretary of the Department for Communities (DfC), Leo O’Reilly, to the celebratory launch at Millennium Court Arts Centre.

The Permanent Secretary was met by a delegation from council, the Department for Communities, Portadown Chamber of Commerce, and representatives from the project consultant and contractor teams, were these important projects were showcased.

Council and the Department for Communities have invested almost £2.5 million in these two projects, which have complemented other recent regeneration schemes in Portadown including the Old Town Quay revitalisation, the People’s Park and the 2011 Public Realm scheme.

Hosting the event, Lord Mayor, Alderman Gareth Wilson commented: “Through ongoing collaboration with the Department for Communities, we are committed to investing in our town centres.

“It brings me great pleasure to see the end results of these projects, from the enhanced connections, footways and lighting to the regeneration of the Pump House.

“These benefits will go a long way to help maximise Portadown’s potential to attract visitors, investment and ensure its continued economic growth.”

The linkages scheme has revitalised several key areas within Portadown, creating high quality streets and spaces, and making the town more inviting and attractive for those who live, visit, shop and work in the area.

The former Pump House – an historic building on the banks of the River Bann disused for decades – has, through this investment, undergone a transformation into a bustling coffee shop, ‘Ground’.

This project, which has created jobs and brought vibrancy to this area of the River Bann, has been shortlisted for two prestigious Royal Institution of Chartered Surveyors (RICS) awards, highlighting the quality and significance of this completed scheme.

Leo O’ Reilly, Permanent Secretary, said: “I am delighted to see first-hand the improvements to the centre of Portadown as a result of this significant investment by the Department and Armagh City, Banbridge and Craigavon Borough Council.

“This investment has contributed to enhancing the streetscape of Portadown town centre, which will hopefully attract investment, tourism and help residents enjoy their local space.

£This project is a prime example of joint working between central and local government.”

With council continuing to develop new plans for future improvements along the River Bann, the regeneration isn’t stopping here.

Council says future plans will aim to capitalise on the success of both the Pump House project and the improved connections between the town centre and the River Bann brought about by the linkages scheme.