‘Relief’ for Co. Armagh father after conviction of street cleaner who quizzed son about sex 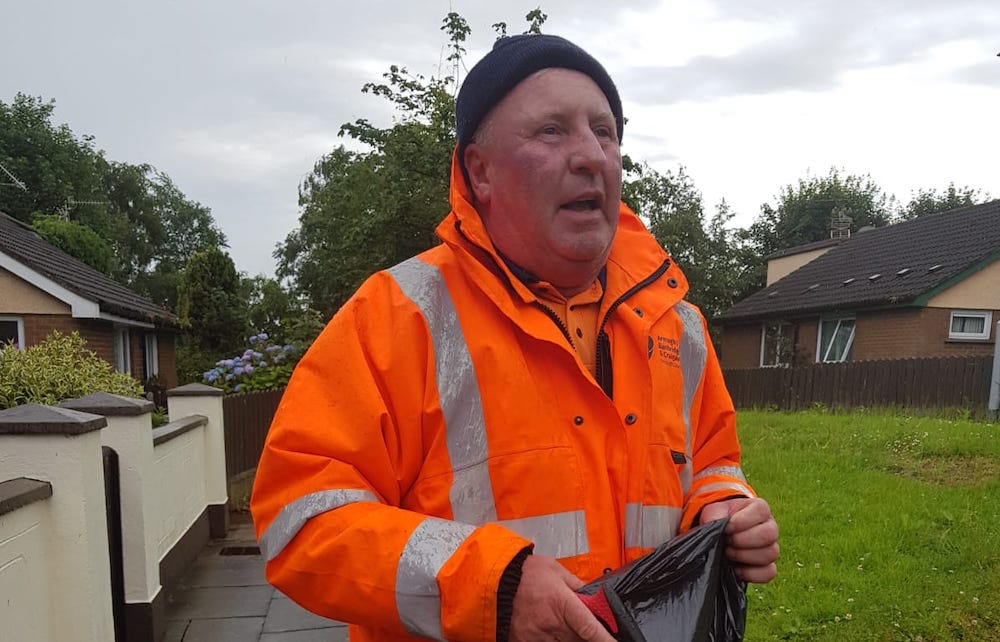 A Co. Armagh father says his family are “totally relieved” at the conviction of a Portadown street cleaner who had quizzed his 15-year-old son about sex.

Martin O’Hagan, with an address of Byrnes Rampart in Lurgan, was last month convicted of sexual communication with a child at Craigavon Magistrates’ Court.

The 60-year-old was working as a street cleaner in Portadown when he approached the then 14-year-old boy and quizzed him about sexual matters.

O’Hagan is alleged to have asked the child if he had a girlfriend, if he had had sex and if he knew how to put on a condom.

Giving evidence, the horrified teenager described how he was on his way home when O’Hagan started to talk to him, beginning by asking him how old he was.

The teenager told the prosecuting lawyer, however, that after he told O’Hagan he was 14, “he asked me did I have a girlfriend, or do I have a problem getting one.”

“I just kept on walking and he kept walking beside me,” said the boy, describing how the situation made him “uncomfortable.”

“He asked have I had sex and I was walking quicker and quickly and he kept on beside me,” he told the lawyer and said he felt “scared” by the conversation when O’Hagan mentioned condoms and followed him to his house.

The boy told his mum what had happened and she gave evidence that her son appeared “nervous and agitated” as he recounted the incident to her.

She told the court she grabbed her shoes and went out to confront O’Hagan, telling him he had “picked the wrong child to talk dirty to.”

She revealed O’Hagan said “I’m sorry” several times, claiming he had recently suffered a “breakdown” and didn’t feel well, outlining how she thought “he was going to have a heart attack” so she called an ambulance and the police.

Giving evidence on his own behalf, O’Hagan told defence counsel Conor Lunny that he believed the boy was “about 17 or 18” so when he said he had a girlfriend, “I just said be careful and make sure that you use protection”.

O’Hagan denied that he knew the boy’s age or that he followed him towards his home.

Speaking to Armagh I, the victim’s father stated: “It was really 14 or 15 months of hell, but thankfully, hopefully it has been and gone now, so we can move on”.

He said that the family were “totally relieved” that the ordeal was over, with his son now finally being able to “settle down” after the nerves of being called to testify.

The victim’s father said: “It took some time and then Covid slowed it down, but every time it was up, he was denying it so it had to go the whole way through the system.

“It was tough that he had to go through it again and be called a liar in court; it was not nice but thank God the judge saw the right way of it.”

Describing the effects of the ordeal on the young boy, he said: “For months after it he had sleepless nights, he had actually been referred to a counsellor. He has seen them once and is to go back to see them. It is not over yet for him but he can start to put it behind him.”

He added: “From where it happened, he followed him to my front door more or less, so what would he not have done if my son did not go home? That’s what worries me more.

“What really annoyed us was that he kept denying it and made my son go into court. My son and wife were more or less called liars in court.”

The case was adjourned for a pre-sentence report, with O’Hagan due to appear for sentencing on November 17.