Tea for two at the Yellow Door – by Royal appointment 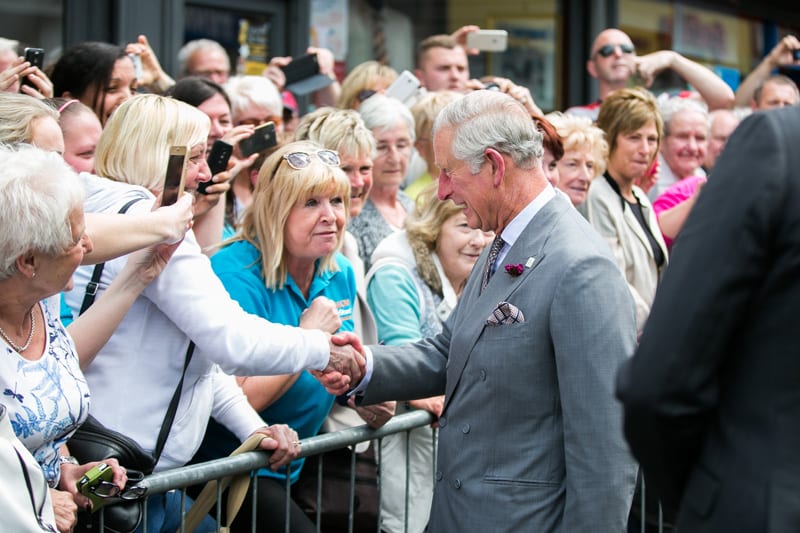 Chef/proprietor, Simon Dougan has put some of Northern Ireland’s finest artisan producers on the Royal radar following a visit by Prince Charles and his wife Camilla to Simon’s Yellow Door deli in Portadown on Tuesday.

A champion of Northern Ireland’s rich food heritage and an ambassador for local artisan producers, Simon hosted the Prince of Wales and the Duchess of Cornwall at his Portadown premises on the second of a three-day visit to Northern Ireland and the Republic of Ireland.

The couple were offered some of Yellow Door’s famous artisan bread, accompanied by the Prince’s favourite Earl Grey tea. As Northern Ireland’s premier outside caterer, Simon has often prepared meals for Prince Charles and other members of the Royal family during their visits to the Province, and so knew exactly how to prepare Charles’ tea – sweetened with a spoonful of honey (locally produced of course).

“I have spoken to the Prince on previous Royal visits, but I never thought that he would drop round for tea with me some day!” said Simon, who, along with his wife Jilly, organized an informal showcase at the Portadown deli featuring some world-class, locally produced food and drinks from County Armagh and across the Province for Charles and Camilla to sample.

“It’s well documented that Prince Charles is extremely interested in the provenance of food and, as a producer himself, with the Duchy Originals brand from his Highgrove House estate, he was keen to learn about our Northern Ireland producers,” said Simon. Edible gardener, Jilly Dougan offered Charles and Camilla an insight into her latest initiative ‘Sow Grow Munch’, a free growing and cooking guide specifically designed for schools to introduce children to fresh fruits and vegetables at a young age as a fundamental step towards developing healthy eating habits. Helped by children from Portadown Integrated Primary School, Jilly put on a display of edible herbs, leaves and pea shoots planted by the pupils.

The Royal couple also enjoyed some demonstrations in traditional food production, including dry cured Yellow Door bacon, using Armagh pork, and home churned Abernethy Butter. At the end of their visit, they were presented with a hamper to take away and enjoy a taste of Northern Ireland’s food heartland.

As a passionate supporter of Northern Ireland’s agri-food sector and artisan producers, Simon is a founder member of the Food Heartland Hospitality Forum (so-called because of the Armagh, Banbridge and Craigavon region’s abundance of specialist artisan food and drink producers) which he helped set up with some like-minded chefs in the ABC council area to promote the use of local produce by food outlets and event organisers.

He is also a member of Food NI, Taste of Ulster and Euro-toques Ireland, and Slow Food NI (part of a global movement, supported by Prince Charles, that links the pleasure of food with a commitment to community and the environment).

“It makes sense to buy locally, ensuring that the money we spend is kept within the local economy,” said Simon. “I believe that the return in terms of reducing food miles, improved traceability, flavour, authenticity and outstanding quality for customers is well worth it.

“The designation of 2016 as ‘Northern Ireland Year of Food & Drink’ has helped establish a new-found confidence in the food we produce,” he continued, “and here in County Armagh we are unique in being home to two of the three world renowned, PGI (protected geographical indication) products in Northern Ireland – Lough Neagh Eels and Armagh Bramley Apples. Eels from Lough Neagh are a highly sought-after delicacy in Europe, while Bramley apples are the most popular cooking apples in the UK! “Food and drink is the country’s single biggest industry, and at Yellow Door, we have seen a proliferation of local produce being bought in our delis. Around 95% of the foods we sell are now made in Northern Ireland, and items such as jams, chutneys and oils have seen an explosion in sales as people have started to realise the quality of the food we have here.

“During the previous three years, bread sales accounted for 10-15% of our wholesale production – this year it’s up to 45%. In addition to our expanding sales in the supply to top quality restaurants, hotels and delis across the island of Ireland, we have opened up new markets supplying bread, patisserie and traditional tray bakes to Belfast International, Belfast City and Dublin airports.

“We can only produce great food with fantastic ingredients, and in Northern Ireland we are fortunate to have so much premium quality produce. Yellow Door aims to be at the heart of this food producing community with a strong farm-to-table focus, and an emphasis on exceptionally flavoursome, seasonal food.”