Portadown shop’s fighting spirit to come back during Troubles – with Covid they’re fighting back again! 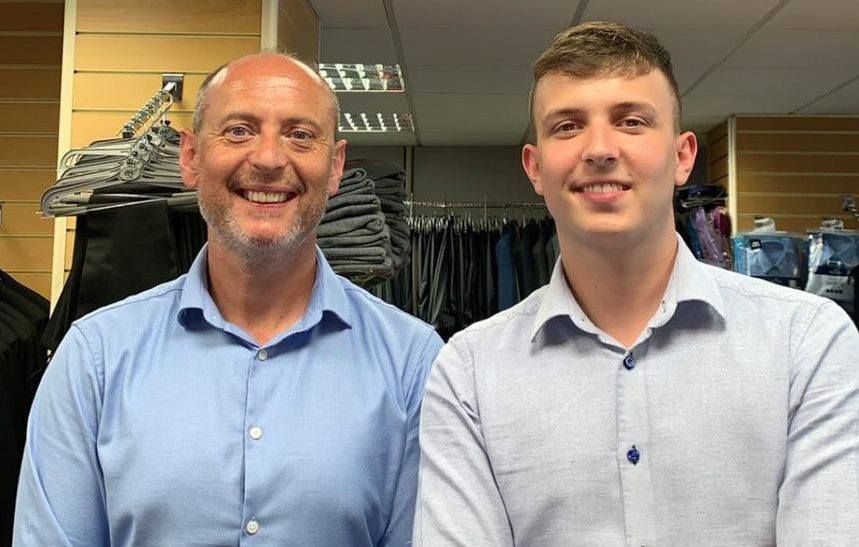 While the pandemic may sadly have forced some businesses to close their doors, others have used the experience to cement their place in the community and expand as they look to the future.

Clothing and school uniform shop Robert Davidson has been in Portadown for 61 years. It survived the worst of the Troubles – several bombs and being burned out twice – and is now embracing the digital age.

The shop was established by Robert Snr, now aged 86, and today his son, also Robert, and grandson Andrew take care of most of the day-to-day running.

While face-to-face, personal contact is the shop’s cornerstone, Andrew (22) is in the midst of building a website which will also allow customers to order online.

The business has been active on social media over the pandemic, keeping customers up to date and  supplies flowing.

In fact, the shop did 220 personal deliveries to customers’ homes, nursing homes and hospitals over the lockdowns with items including pyjamas and school uniform.

Said Robert: “When the first draft of schools went back, we weren’t allowed to open, but the multinationals were and they were able to sell clothing and footwear which was a big gripe of mine.

“Myself and five other independent retailers spoke to Arlene Foster about it on a Zoom call. I told her it wasn’t a level playing field. I supply 32 schools and yet I wasn’t able to open. Once click and collect started, it wasn’t so bad.

“Before we got help with furlough, I was quite worried – there was a lot of uncertainty. When help came, that was a big relief, especially when you knew your staff were being looked after. It gave you a fighting chance and I slept a bit better.

“Serving the local community has helped me in terms of my business.. I could have pulled the shutters down and done nothing for four months but I wouldn’t have been happy doing that when people were in need of things.

“And I think it’s important that you do work within your local community. If you lose that heartbeat in the town then I think you’re in a really dangerous position.”

Robert believes that once Covid settles down, the big issue for small businesses like his will be rates.

“In proportion to the footfall, the rates are too high,” he said. “At the moment, we still have the rates holiday but sadly I think that when that ends, there will be some casualties.

“I hope it’s something the Stormont Executive will look at, not just for Portadown. It should be a priority for all town centres.”

He also wants to see “real leadership” from Stormont, to help “get the country back on its feet”, especially once financial help ends.

“We need the politicians to get down to work and work together for the good of the country,” he said. “It’s not just about retail, it’s about everybody’s jobs. It’s a circle and everything has to work together for a good, strong economy.”

Robert also believes people have a key role to play by continuing to shop local.

“I think during Covid people have shopped more local. People who would have worked in Belfast are now at home and shopping at home,” he said.

“Personal contact with the customer is vital, as is the family store environment – that has been key to us down the years and still  is.”

The shop, which is situated in Bridge Street, employs seven other staff and an extra five students in the summer to help with schoolwear.

“The students are fantastic – some go on to become doctors and teachers and principals – they learn good people skills here that give them a sound grounding,” he said.

Reflecting on the past year-and-a-half, he added: “Dad came to town in 1960 and despite all the setbacks of the Troubles, he had a great fighting spirit to come back every time.

“Covid has been another example where businesses have had to adapt and change and fight back. We are a resilient people.”