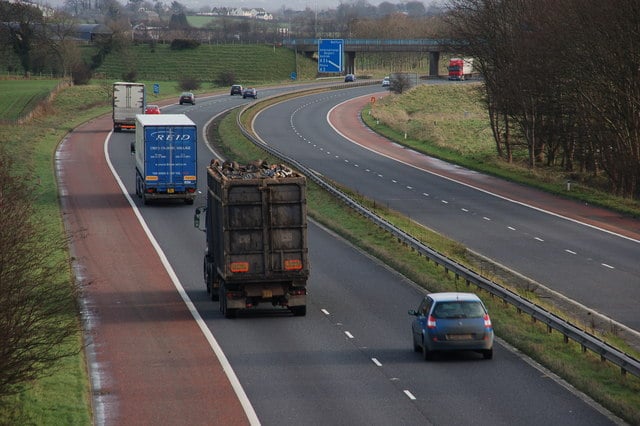 A Portadown man who produced “quite a high reading” after crashing into barriers on the M1 has been slapped with a £750 fine and 12-month driving ban.

The 39-year-old was charged with dangerous driving, driving with excess alcohol in breath and possession of Class C drugs, namely Diazepam and Amitriptyline.

The court heard that at around 1am on June 4, police received a report of a possible drink-driver, as a vehicle was being driven on the M1 in a reckless manner. Police located the vehicle which had crashed into the barriers between junction 11 and 12.

The driver, who was identified as the defendant, reportedly had a strong smell of intoxicating liquor and was unsteady on his feet. He subsequently failed a preliminary breath test (PBT).

When taken to Banbridge custody suite, a further breath reading produced an evidential sample of 99mg per 100ml of alcohol. The legal limit is 35mg. While in custody he was searched and a blister pack was found.

Foy’s defence solicitor commented that the defendant “apologises to all those concerned”.

He added: “Throughout the pandemic he had been on his own, on furlough, with no family support and out of that came depression and self-medication. There is a light at the end of the tunnel. He’s back into full time employment.”

Deputy District Judge Kennedy noted that the alcohol test had produced “quite a high reading”.

For driving with excess alcohol, he imposed a fine of £500, along with a 12 month disqualification from driving. For careless driving, he added a further £250 fine, along with a six month driving ban to run concurrently with the 12.

For the drugs possession, Foy received a one year conditional discharge, and a destruction order was made for the drugs.