‘I’ve heard it all before’: Heart-broken mum reacts to child heart services pledge 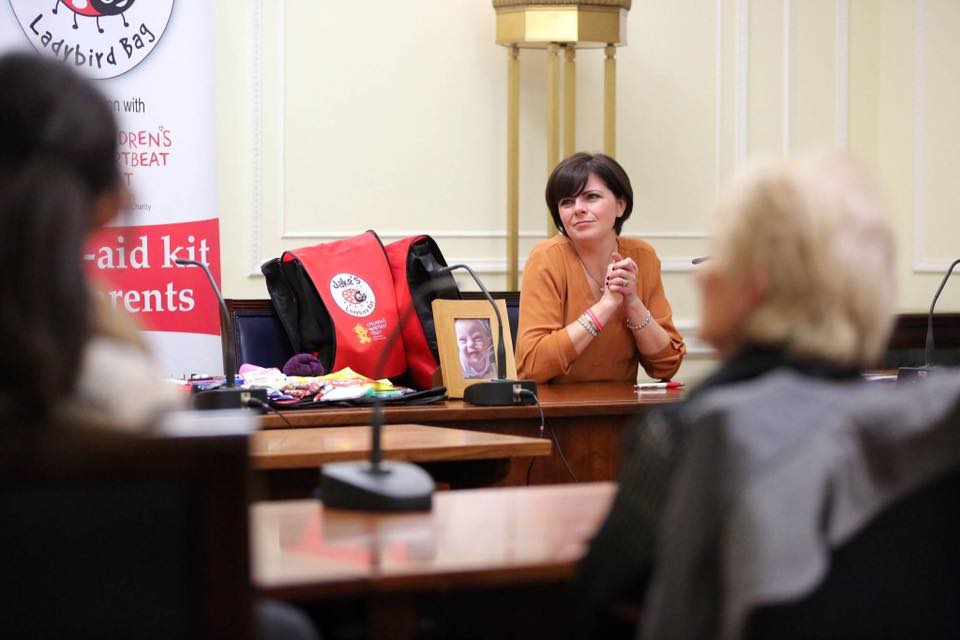 A Portadown councillor – whose son died two years after undergoing life-saving heart surgery in Belfast – has criticised delays in planning for the future of children’s heart services here.

Julie Flaherty voiced fears over when and if a multi-million pound investment announced today will become a reality.

His heart-broken mum later launched a charity in his memory – ‘Jake’s Ladybird Bags’ – which are designed for families travelling with their children to hospitals in England and Dublin.

Julie – who was co-opted on to Armagh City, Banbridge and Craigavon Borough Council to replace Doug Beattie MC after he was elected MLA in May – was in Parliament Buildings in November last to highlight the issue.

She was attending the All-Party Group on Congenital Heart Disease to launch the first ever dedicated support packs for families travelling out of Northern Ireland for heart operations.

The Ministers made the announcement at the opening of the new Hybrid Cardiac Catheterisation Laboratory at Our Lady’s Children’s Hospital Crumlin (OLCHC) Dublin.

The all-island Congenital Heart Disease Network was established in March 2015, the first clinical network of its kind, and intended to bring benefits to patients across the island of Ireland.

Minister O’Neill said: “The joint investment, over the next five years, will help to realise our vision of a world-class all-island network service.

“I recognise many families would wish to see these services delivered sooner ‎and every effort is being made to deliver this. The investment announced today combined with the detailed planning by the Network Board over the past year will help to achieve this, ensuring that these children will soon be able to have their surgery within a reasonable travelling distance from their homes, and with their pre and post operative care being delivered in Belfast.”

The investment by both Health Departments, which includes £1 million capital investment to enhance existing facilities in Belfast, will realise the implementation plan put forward by the all-island Congenital Heart Disease Network Board.

It envisages completing the phased implementation of the transfer of all urgent surgical cases from the north to OLCHC between now and the end of 2017 and all elective surgical cases by the end of 2018. In the interim the Belfast Trust will continue to operate a service level agreement with OLCHC to provide emergency surgical treatment in OLCHC for patients in the north.

Councillor Flaherty said she had been “bitterly disappointed” at the way this issue has been handled over the years.

She said: “Parents, at their most vulnerable, have been met with delay after delay.

“As a mother of a son born with a serious heart defect I know just how difficult this whole process has been.

“Having started back in 2012 when Jake was still fighting his own battles it seems the ‘plan’, which should have been delivered in 2016, is now just beginning with this announcement from the health Minister.

“I’m afraid I have heard this all before.

“Promises by consecutive health ministers left by the wayside with families left to pick up the pieces and charities offering support where possible.

“These endless headline grabbing press releases of investment after investment raise the hopes for mothers like me but as I found they are hollow promises.

“Children are still having to travel to Great Britain for life saving surgery and will continue to do so until the end of 2018.

“Jake lost his fight for life in May 2013 and I will continue packing Jake’s Ladybird Bags to help mothers who find themselves in my situation – a little kit for parents who have to travel at short notice beyond the family support network that would have been available to them close to home.

“The reality felt by many parents will remain the same before and after this statement – worrying, wondering and waiting!”