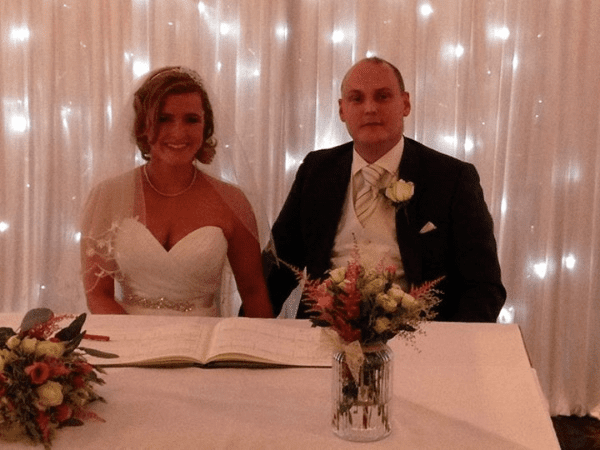 A County Armagh man, who fulfilled his dream of marrying his sweetheart last autumn thanks to the kindness of strangers, has been laid to rest.

David Smith passed away on Saturday, surrounded by his loving family, after a brave battle against cancer.

Today (Monday), he was laid to rest in Kernan Cemetery, after a funeral service at Joseph Poots and Sons Funeral Home.

The young man had only married Katy in November. David and Katy on their wedding day

There was nobody she wanted to be with more and the couple set up a gofundme appeal to raise the money to allow them to travel to Lancashire and tie the knot, with both families there to watch them say ‘I do’.

Now donations in lieu will of flowers will go towards the ‘Gift of a Wedding’ charity, which helps couples living with terminal illness fulfil their wish of tying the knot.

David and Katy (nee Harris) met 11 years ago after Katy, who worked in a call centre, phoned the Portadown lorry driver to try and sell a mobile phone contract.

They got on so well that they agreed to meet and had their first date in Katy’s native Manchester.

The couple fell in love and Katy quit her job and moved to Northern Ireland to be with David, with whom she has a young son, Danny.

It was at the end of September 2010 that they received the devastating news that David had been diagnosed with a brain tumour. After an operation and six weeks of gruelling radiotherapy, the tumour stayed stable for a while and the couple were blessed with the birth of Danny.

David was told he had only six months to a year to live but he proved them all wrong and was able to watch his beautiful boy being born and taking his first steps.

In October 2014, however, they learned the cancer had spread and, in March last year, were told David had only about six months to live.

Strangers and businesses stepped forward to answer a public appeal and, thanks to their generosity, the couple wed in November.

Davy sadly passed on Saturday at home in Portadown, surrounded by his loving family.

Donations are being made to Gift of a wedding, c/o Joseph Poots & Son Funeral Directors, 42 Bridge Street, Portadown BT63 5AE.

Deepest sympathy is extended to Katy, Danny and all of the family circle at this very sad time.