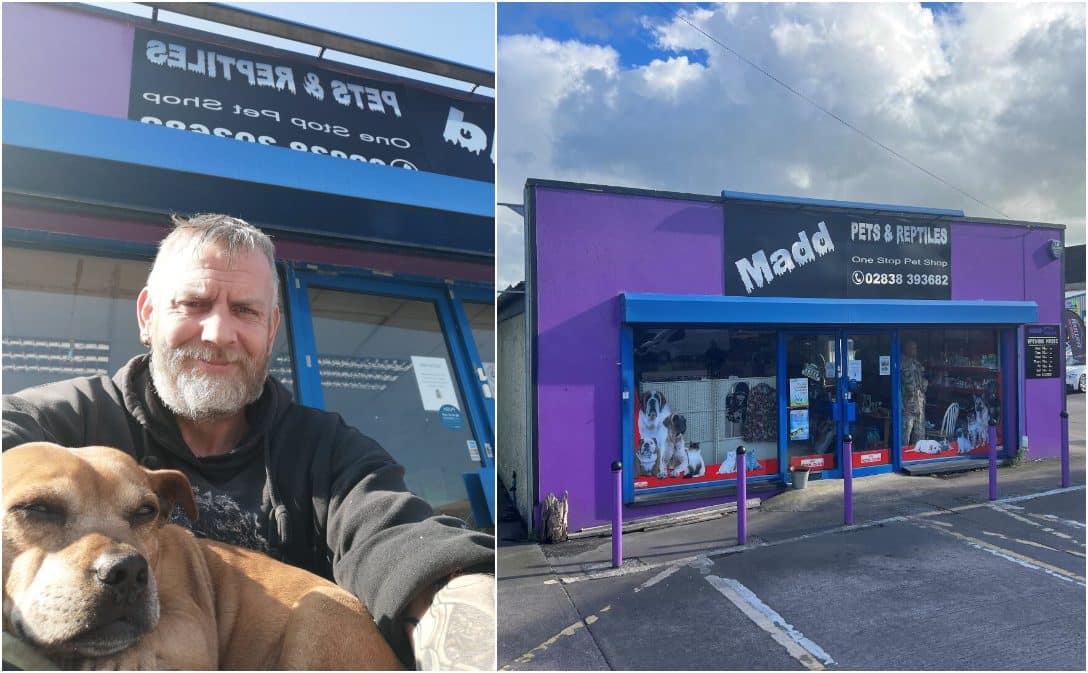 For the best part of a quarter of century a pet shop has stood prominently located at number 1A Mahon Road in Portadown.

For the last 10 of those years, that store – Madd Pets and Reptiles – has been passionately run by Lurgan man David Rooney.

But for Davy, he believes it is now time to pass on the baton, despite his unquestionable love and devotion to the animals he sees as his extended family.

The 46-year-old took over the reins of the store on July 10, 2012, with the help of his father, but since his father’s sad passing six years ago Davy has operated the store single-handedly.

A pet shop is a seven-day-a-week commitment.

“I have absolutely loved it; I love animals. For me, it has been the perfect job. I just really wanted to work with animals,” said Davy who spent time in the armed forces, as well as a fibre optic technician.

“We’ve had everything at that shop. It was a venomous pet shop a the beginning; we’ve had all sorts of reptiles, from scorpions and millipedes, to snakes and cobras – all sorts of unusual breeds.”

Davy says the families who purchase from him always keep him in the loop with how they’re getting on, with photographs and videos – people even bring him around to their homes to see the animals – but for him, it’s “brilliant seeing the kids’ faces light up” when they come into his store.

And the nature of the job has allowed Davy to meet such a diverse range of people from various ethnic and cultural backgrounds.

“People come in and animals are such a good way of breaching the language barrier. We don’t know what each other is talking about but we’re pointing to food and lizards and we’re laughing together; it’s a great way to meet new people, people who keep coming back in too.”

While Davy is looking forward to a break and the chance to spend more time with his daughter in Malta, he admits moving on will be tinged with sadness.

“My dad help me found the business 10 years ago and he passed away six years ago, so there are memories of my dad here when we started off but ultimately it’s just time to move on,” said Davy. Davy Rooney with his dog Archie

“Working six days a week and feeding them on a Sunday; there’s very little time off. It’s more a business for a young family or maybe a few people. I’m here by myself; it would make it a little easier if there were more people.”

The business is on the market and Davy believes it has “got such potential” stating that had perviously set up a reptile boarding business within the premises, and that there’s a dog grooming parlour out the back.

But he says, that’s for someone new to forge their own path – his 10 years have been brilliant.

“I’m at a stage now where I want to go out and spend time with my daughter. I haven’t left the country to go anywhere in God knows how long. I want to travel a wee bit, see the world.

“I’ve buried too many friends recently. They would have always said they’d retire early, things like that. One of my best friends said he would retire at 55; he took his first heart attack when he was my age now. He was a guy who did mountain rescue and he can’t walk the length of himself now.

“I want to get out there. I’ve been with the shop for 10 years; I want to go and explore, spread the wings and enjoy life while I can before I get too old.

“I’ve never been money or possession orientated – I don’t need much because I’ve got my van, my dog, Archie; that’s us, we’re set. I can sleep in the back of the van, and tour around Europe. I’m just looking forward to it so much.

“I’ve worked every day of my life since I was 12 years old so why not? I just want to see what the world has to offer.” Madd Pets and Reptiles in Portadown

Are you interested in running the pet store? Check out more details here.