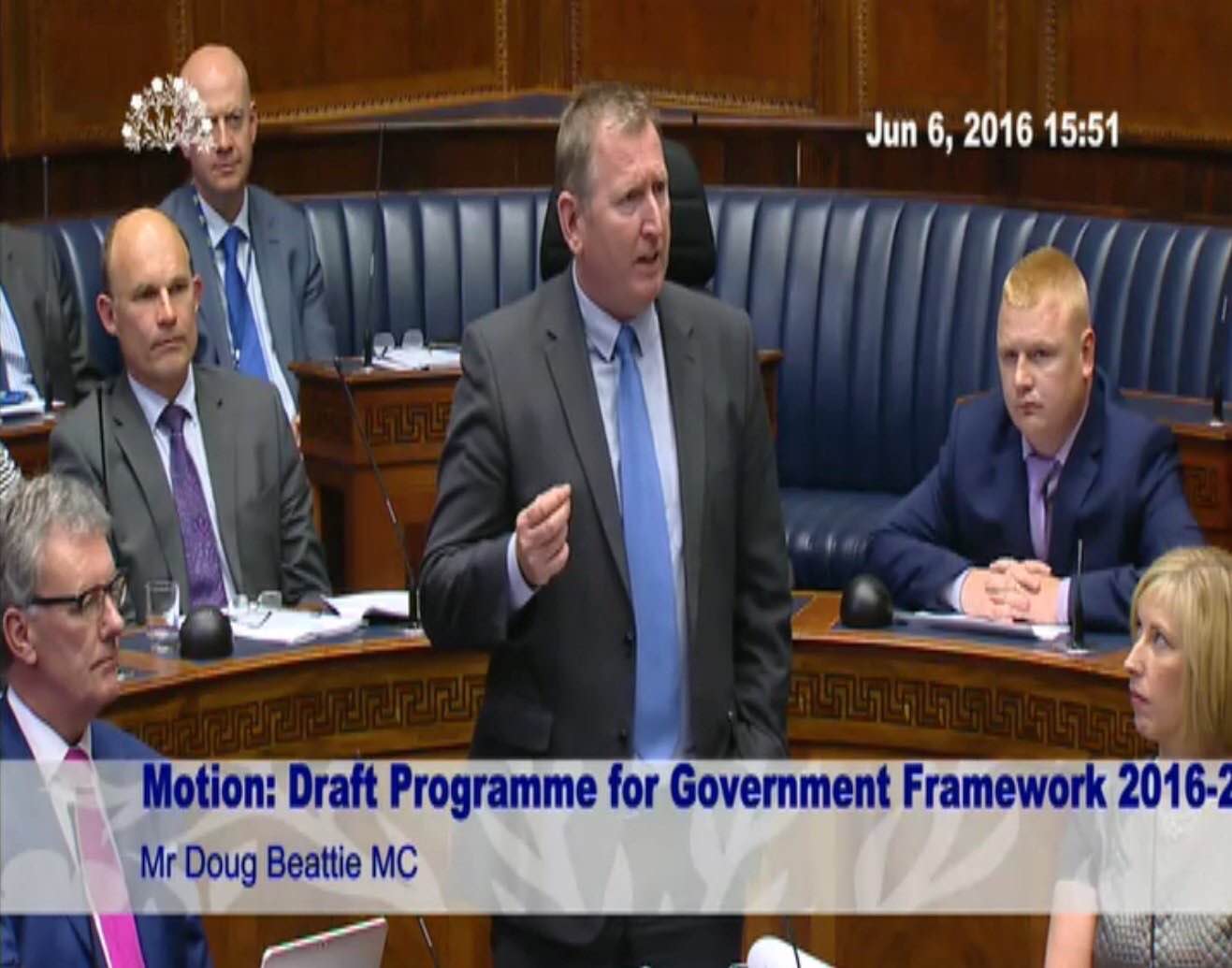 The recently-elected Upper Bann Assemblyman levelled the accusation during his maiden speech to the Assembly on Monday.

He did so after referring to the images of children gathered at a dissident parade in Lurgan last month.

Mr Beattie was speaking during a debate on the Programme for Government and said he was “disappointed by this whimsical document on crisp white paper with no real value, intellectual currency or, in fact, shifting responsibilities”.

“Let us drill down into the document a little. No, let us just scratch the surface for a moment. At its heart is the Fresh Start Agreement, and, at the heart of the Fresh Start Agreement is tackling paramilitarism. Yet, there is absolutely no mention of paramilitarism until page 29, and, even then, it is fleeting with no measurable outcomes and no indicators. Let me just take a line from outcome 7, if I may.

“Where are the indicators to address that? In fact, the Executive — I have to say that the Ulster Unionist Party was part of the Executive and is not without blame — are sustaining paramilitarism in this country. Looking to the future, I can see us sustaining it for another five years. We have semi-autonomous paramilitary wings at Her Majesty’s Prison in Maghaberry.

“We allow that to happen. We sustain it. We give it credibility. We give it an identity. We are giving it structure. We are allowing them to direct terrorism, and, if anybody thinks that that is not true, you just have to look at the brutal murders of prison officer Ismay and prison officer Black.

“Where are the indicators to deal with that and to stop the segregation and treat those people as they are: criminals to be dealt with as criminals?

“Look at it from a more basic level and at the illegal paramilitary parades on our streets.

“Indeed, in my area of Upper Bann, in Lurgan, there were men, women and children dressed in paramilitary uniforms. I commend the Police Service of Northern Ireland for how it dealt with them during and after the parade, but the damage is already done because those paramilitary parades are influencing our children.

“Where is the indicator to deal with that?”

Mr Beattie said, as a new MLA, he came in “expecting to see a Programme for Government that would handrail us to a brighter long-term future”.

“I genuinely did, and I genuinely want that,” he added. “What I got was an expensive doorstop holding closed the door to prosperity, social progress, cultural acceptance and the normalised society that our people deserve.”

At the outset of his speech, Mr Beattie had paid tribute to his predecessor, Sam Gardiner MBE, a one-time Father of the House, and thanked all for their support following his recent family bereavement.

“I must take the opportunity to thank those people for putting their faith in me and voting me into the Assembly.

“I believe that it is also important to show humility because, for all those who voted for me, there are many more who did not and did not give me a preference. I will represent them just as much as I will represent anybody else in my constituency, and I will use the core values and standards that have sustained me over my whole lifetime: integrity, respect for others, professionalism, selfless commitment, courage and, above all, loyalty.

“I am extremely proud to be opening a fully functioning MLA constituency office in Portadown once again.

“If I may, I will take a moment out to thank all Members for their kind words of support on the passing of my beautiful grandson Cameron, who died at the age of 15 months, the day before the election. Your kind words have sustained me.