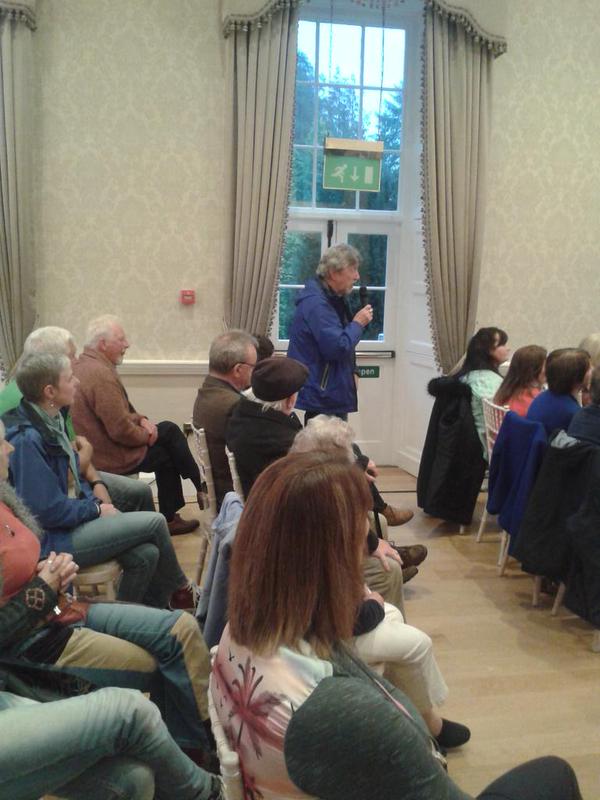 Political representatives have urged the Southern Trust to take on board the depth of feeling which exists in the community and bin their plans to close Armagh’s minor injuries unit.

Representatives from each of the local parties were present at a public meeting in the Palace last night (Tuesday), when they, together with trade union reps and members of the public, had the chance to put the spotlight on the Trust.

A three-strong panel from the Trust – led by its interim chief executive Paula Clarke – took the top table at the Palace chamber and outlined the proposals – the hows and whys – before the united objectors had their say. Newry and Armagh MP Mickey Brady (pictured addressing the meeting) said every consideration must be given to retaining the facility and taking on board the extent of public opinion.

“Whilst we appreciate the difficult financial pressures facing the provision of health care services generally, and the difficult task that the Southern Health Trust, like others, has in having to work within the confines of a budget continually under pressure from a Westminster public spending cuts ideology, we remain deeply disappointed at the Trust’s apparent determination to close this facility,” he said.

“We appreciate the Trust taking the time and opportunity to listen to the local community at the consultation event and we hope that the submissions made and depth of feeling evident will be considered fully before any final decision is made.

“The consultation closes on September 11th and we urge every resident in Armagh City and District to respond and make their views known.”

Urging the Trust to take on board the depth of feeling within the community, Cllr Garath Keating said what was apparent from the views raised in last night’s public meeting was the level of frustration from local people that this service might be lost.

“Whilst the campus may not have been as busy as South Tyrone or Craigavon, it nonetheless was of huge material benefit to those who did require it and to the local community,” he said.

“Many of those present voiced concerns over the lack of communication around the closure and the Trust are keen to get word out that the Community Hospital still remains open to provide a range of services including Physiotherapy, Audiology, Speech and Language Therapy, Maternity and Radiology.”

Mirroring his sentiments, colleague Cllr Darren McNally said the MIU “serves a real purpose to the people of Armagh and the wider area” and “the Trust should fight to keep it open”.

He added: “The feeling from this public meeting shows the depth of opposition to the closure. Given the relatively small cost of maintaining the service – £200,000 in the overall context of the Trust’s budget of £500m – the small projected savings to be realised by the closure do not sit at all comfortably with the level of local opposition to the move.”

Meanwhile, SDLP Councillor Thomas O’Hanlon called on the Trust to immediately reinstate the MIU, during the course of a meeting which he had urged back in June.

He said it was great to see people from across society – including patients, staff, trade unions and local councillors – attending.

Councillor O’Hanlon went on: “The Southern Trust plan to permanently close the Minor Injuries Unit in Armagh which effectively leaves us with no health care provision in the area after 5pm or at weekends.  The Out of Hours GP base is constantly closed as the Trust tries to plug gaps elsewhere in the service.

“Eleven times during the month of July the Armagh base was closed. The feeling in the community – and it was very clearly articulated tonight – is that when push comes to shove, Armagh loses out.

“At the same time as the Trust are proposing to permanently close the facility in Armagh, Portadown has a state-of-the-art Community Care and Treatment Centre which is only a stone’s throw from Craigavon Area Hospital, which has an Emergency Department, Minor Injuries and GP Out of Hours Base.

“Works are at an advanced stage for a new Community Care Treatment Centre in Banbridge and a tender process is ongoing to provide a similar facility in Newry, not far from Daisy Hill and its Emergency Department, Minor Injuries and GP Out of Hours base. You really couldn’t make this up.”

Councillor O’Hanlon asked the interim chief executive to “urgently engage” with the new Armagh City, Banbridge and Craigavon Council to plan a way forward for the future of health provision in the city and district, including the provision of a new Community Care and Treatment Centre in Armagh City.

“This facility would see a closer working relationship with GPs, the Southern Trust and all facilities such as X-ray, physiotherapy etc on one site,” he added. ” Surely if Portadown, Banbridge and Newry are entitled to modern, fit for purpose health facilities then so are we.

“I’m not saying a Community Care and Treatment Centre is the answer to all our problems – nor will it replace the minor injuries unit – but it can help the crumbling system locally.

“It is simply not good enough to direct people up to 30 additional miles to get to a minor injuries unit in Dungannon or to an already bulging Emergency Department at Craigavon or Daisy Hill.

“I have asked the Council Chief Executive to convene a meeting of the Armagh City Councillors and the Community Planning Committee as a matter of urgency to discuss the way forward.”

The public can still register their opposition up until on September 11.