Police appeal over theft of ‘safety gate’ at Bessbrook Pond 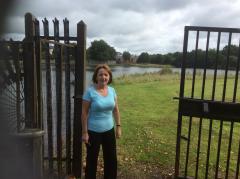 Thieves who stole a gate from Bessbrook Pond have been accused of putting lives at risk.

The black metal gate – which measures approximately six feet by four feet – had been taken some time between Friday, July 17 and Wednesday, July 22.

Police in Newtownhamilton are appealing for information following the theft.

Constable Lee McGill said: “The gate was in place to prohibit access to a dangerous area around the pond.

“The gate is wieldy and we believe it would have taken at least two people to remove it and a vehicle to transport it.

“We would like to hear from anyone who noticed any activity in the area during these times or anyone who has information which may assist our investigation. We can be contacted in Newtownhamilton on 101, quoting ref: 316 230715.”

“This is a reckless act carried out by those who have no regard for the safety of children and young people and indeed no respect for the entire Bessbrook community,” she said.

“I wish to express my thanks to our council workers who have worked so quickly in a bid to temporarily secure the area.

“These sorts of crime may seem victimless however the cost of the replacing of the gates will be met by the ratepayer.  I have no doubt that all those living in Bessbrook would rather see their rates spent on improving facilities within the area.

“I urge anyone with information on the theft of the gates or indeed anyone offering the gates for sale to contact myself or the police.”