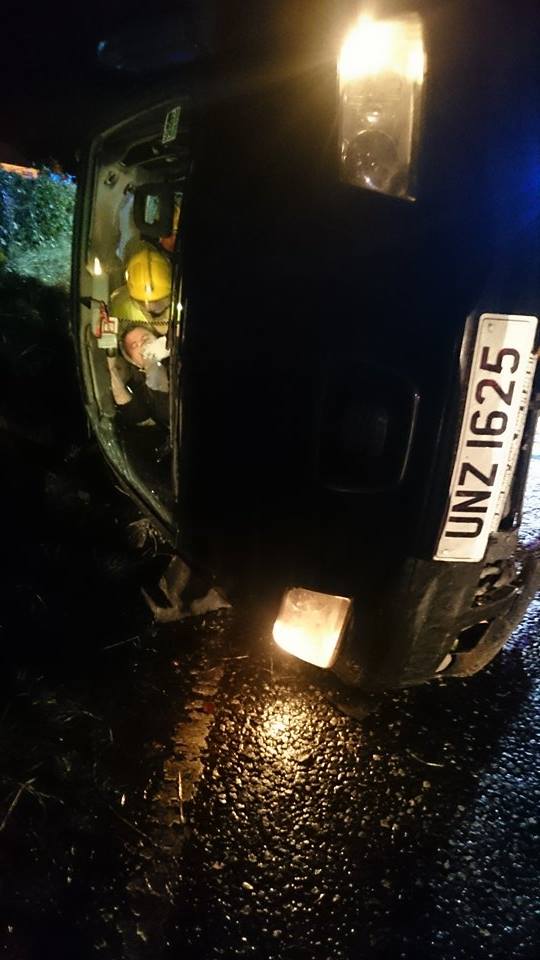 The family of a County Armagh man who had a lucky escape when his vehicle landed on its side after skidding near Keady last night has thanked all those who came to his aid. Receiving oxygen on the scene, as the car lies on its side

Brian Donnelly, from Blackwatertown, was involved in the accident close to the turn off for Bachelors Walk at around 6pm last night (Friday).

His wife, Leanne, speaking to Armagh I this evening, praised the professionalism and care of the emergency services at the scene – and has urged others: “Please, please take care on that road.”

“Brian was on his way to work after coming from the border to get diesel,” explained Leanne. “He had already been on the road as he left the kids off in Keady an hour earlier so we are blessed they were not in the car.”

She said her husband knew the road was slippy and in bad condition and, despite driving safely for the conditions, the accident occurred.

What followed will always stay with them. “Brian was in that position for at least 40 minutes until the fire service got the car seats out of the back and they finally got him laid out straight in the back and wrapped up warm,” added Leanne.

“The fire service doctor and police were all at the scene pretty quickly – the problem was the ambulance.

Leanne says, despite the delays, her husband could not have been in better hands.

“Brian got the best of care from all the services involved, in particular the Keady fire service,” she said.

“They kept me calm and told me everything step by step. Local people that were there with Brian were amazing and they did everything they could for us.”

Brian himself is eternally grateful to all.

He told Armagh I: “I would like to thank all the emergency services and everyone who stopped with me through my ordeal. Everyone was so nice.”