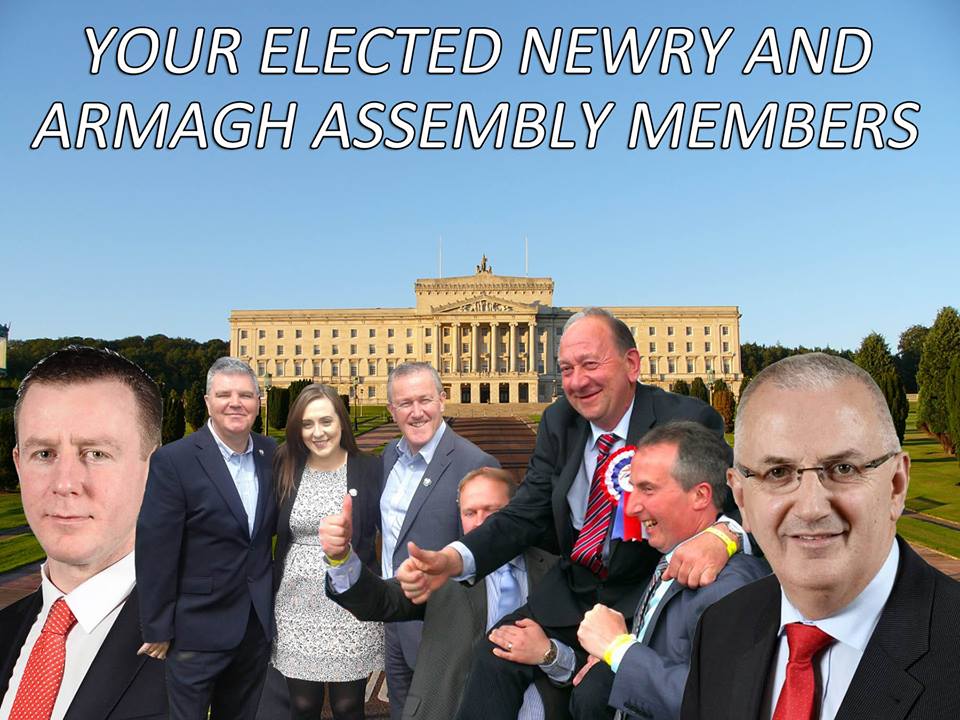 Newly-elected MLAs have offered their thanks to local voters after their successes at the polls last week.

With the counting completed at the weekend, now it is time for the real work to begin.

The Ulster Unionist Party, Sinn Fein and SDLP have offered their thanks to the voters who ensured their places at Stormont.

Following the election, Mr Boylan thanked all those who had made the result possible.

He said: “Now that the dust has settled I would like to take this opportunity to say a big thank-you to everyone who came out to vote for Megan Fearon, Conor Murphy and myself. You have placed your trust in a strong Sinn Fein team at Stormont and we will not let you down.

“The hard work starts now and we will deliver on our progressive, republican platform of justice and equality.

“Thank you to Megan and Conor for all your support and I look forward to working with you to deliver for Newry and Armagh. I want to give a huge thanks to my election agent, campaign manager and team, it’s all down to your hard work and efforts that we got three across the line. Comhghairdeas agus Maith sibh.

“In particular I want to thank and send my condolences to my comrade and friend Mickey Brady MP. Mickey was a huge part of this campaign, his connection with the people of the constituency is unparalleled.

“Sadly, Mickey’s mother, an incredible woman in her own right, passed away just before polling day and I can speak on behalf of everyone in Sinn Féin when I say the entire Brady family are in our thoughts.

“Finally, I want to thank my family for all their patience, support and encouragement. We still have a lot of work ahead of us to build a fair Republic so your efforts and understanding are always appreciated.”

“I want to thank each and every one of you who voted for us and proved that there is an appetite out there for progressive republican politics based on justice and equality. We will not let you down,” she said.

“I also want to take this opportunity to offer our condolences and support to our great friend and comrade Mickey Brady who lost his mother this week. Our thoughts and prayers are with Mickey and the Brady family.”

Ulster Unionist MLA Danny Kennedy, meanwhile, has expressed his “sincere thanks and appreciation to the electorate” for returning him to the Northern Ireland Assembly.

Mr Kennedy said he was honoured and privileged at the support he received from voters and said he looked forward to continuing to represent the Newry and Armagh constituency at Stormont during the next mandate.

He thanked his election agent and election team for their hard work during the campaign and also his constituency staff for their dedicated work over the past five years in his Advice Centres.

He also paid tribute to his party colleague and running mate, Councillor Sam Nicholson for the “very positive joint campaign” they had conducted.

“I have no doubt that Sam will continue to offer a high quality level of representation to his constituents as a member of Armagh City, Banbridge and Craigavon Borough Council,” said the MLA.

Mr Kennedy expressed his personal thanks to everyone who had voted for himself and Sam Nicholson, supported their campaign and offered encouragement during it.

He added: “I will endeavour to repay the faith placed in me by the electorate by striving to deliver on issues such as encouraging investment into the constituency, placing an emphasis on maintaining and increasing employment in the area, improving infrastructure locally and delivering on issues of health and education.”

Mr Kennedy said that the election campaign had been “significantly impacted on the issue of the position of the First Minister and it was clear that that had influenced the choice voters made in Newry and Armagh and amounted to ‘project fear'”.

He said he would seek to represent the entire community in the new mandate on a positive basis and he looked forward to working constructively with other representatives for the benefit of the area.

New SDLP MLA Justin McNulty also thanked those who came out to vote for the SDLP in Newry and Armagh and said he is looking forward to the term ahead with a “desire to make a real difference”.

Mr McNulty said: “I want to sincerely thank all those who came out to vote for the SDLP in Newry and Armagh last week. It is a great honour to be elected to represent the people of this constituency and it is a role I look forward to with a real desire to make a difference to this community.

“On the doorsteps, I set out my vision for Newry and Armagh, one which set out a real ambition for this constituency and its people, and this is a message which the people have endorsed.

“In celebrating my election, I am disappointed not to be joined in the Assembly by my colleague Karen McKevitt.  Karen has been an outstanding public representative for the SDLP for over 10 years, both at local government and in the Assembly. She has been a passionate advocate for the people she represents and her determination to do her best for people will be sorely missed in the Assembly.

“I follow in the footsteps of Dominic Bradley, John Fee and Seamus Mallon as an SDLP voice for Newry and Armagh at Stormont. Like them, I will put my heart and soul into representing the people of this area over the next five years and beyond.’

“I will also be prioritising the need for central government to support economic regeneration in the constituency, in both Armagh and Newry, but also in our towns and villages. We need to make real progress on our road and rail infrastructure as well as significant improvement in broadband connectivity, especially in rural communities.

“Finally I want to place on record my sincere thanks to my campaign team, who made my election possible. We spent many hours, walked many miles and knocked many doors to win this seat. I am indebted to them for all their hard work over the last six months, it was a great team effort.

“In the early hours of Saturday morning, six of us were returned as MLAs for Newry and Armagh. Now that the elections are out of the way, we must work together for the betterment of this constituency.”

Meanwhile, the Sinn Fein duo in Upper Bann have also thanked voters for their endorsement and “for making history” in the constituency.

The party views the election of Catherine Seeley and the re-election of former Education Minister John O’Dowd as a  major breakthrough for Sinn Fein in Upper Bann.

Mr O’Dowd said: “I would like to thank all of those who came out and voted for Sinn Féin. Catherine and I, along with our team, have worked very hard on this campaign. I am delighted that the electorate have returned a team of two Sinn Féin MLAs for Upper Bann. Undoubtedly, this is an historic victory and a major political achievement.”

Newly-elected MLA Catherine Seeley also thanked the electorate and said she was delighted to be returned as an MLA.

She added: “I would also like to thank the electorate for electing both John O’Dowd and myself. It is a privilege to have been elected and I have no doubt that both of us will work to the very best of our ability to represent all the citizens of Upper Bann.

“Both John and I look forward to continuing our work as part of team Sinn Féín and to working with all the other MLAs now elected for Upper Bann.”