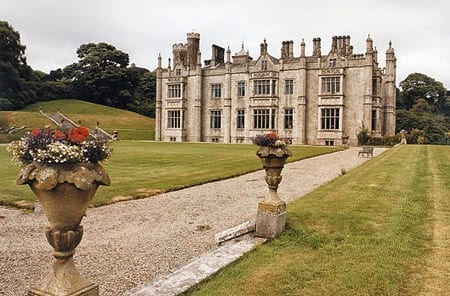 But the four-day event in August is raising many eyebrows and objections.

And one of the historic home’s trustees is reported as being among the chief objectors.

Narrow Water Castle is home to the Hall family, who have lived there since 1670, originally in the old Narrow Water Keep on the shore of Carlingford Lough.

The castle, set in 700 acres of grounds, is used for weddings and other functions.

It has its own website and the venue can booked through the Narrow Water Castle Events team, which is based out of Markethill.

The festival planned for August 7 to 10 is being organised by Bliss Ireland; it is the fifth such event since it was established by Beth Wallace, the first being staged back in February 2012.

According to the Bliss Ireland website, the purpose of festivals such as this are “to create spaces and events that offer a holistic exploration of adult sexuality, and to build a community of like minded people in Ireland and further afield”.

It adds: “Bliss events vary a lot. Depending on the event, they may include information and performance, visual arts and workshops, food, experiences and the teaching of techniques, practices and ways of holistically exploring sexuality. “It is our intention to offer all of this in a supportive, open minded atmosphere, in a beautiful venue/location where we can meet, explore, celebrate, play, talk, share and connect and express ourselves with like-minded adults.”

The website adds: “It is a very common misconception that because sexuality is out in the open and ‘on the table’ at our events that sex is going to be happening everywhere and this is simply not the case.

“Bliss events are an opportunity to talk, share, learn, discover new skills and techniques, have new experiences, connect with friends old & new, to explore and expand.

“The goal is not to offer spaces for the sole purpose of people having sex with each other (not that there’s anything wrong with that!). There are other places and environments which cater to that, that’s not what Bliss events are about.

“That said, at the summer festival there is usually some sexual activity taking place privately in tents, just like happens at every other Festival in Ireland and around the world, the major difference being that there aren’t recreational drugs or alcohol involved.”

Bliss Ireland points out that the event “is not owned, organised, nor run by Narrow Water Castle residents nor any member of the Hall family”.

It adds: “Bliss Ireland has hired the castle for the sole purposes of holding the festival.”

Sir William Hall, one of the trustees, dismisses claims that sexual activity will be confined to tents.

And his solicitor has written to the Northern Ireland Attorney General on the matter.

Sir William told the Belfast Telegraph newspaper: “Sex toys will be on sale, talks will be given which may purport to be serious but the real object is the giving of sexual titillation and gratification to the participants in the festival.

“Nudity and acts of sexual intercourse will be prevalent.”

And he claimed of the event: “The notion that the people attending this festival will restrict their lewd behaviour to the privacy of tents and that there will be no abuse of alcohol or drugs is completely fanciful.”