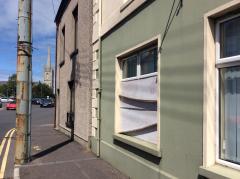 Mindless vandals have targeted premises of two charities – one which helps young people and adults with learning disabilities and another which targets prevention and awareness of suicide and self-harm.

Windows were smashed in the premises of Newry Gateway Club and PIPS at Kilmorey Street in Newry.

Newry Gateway Club’s premises were extensively refurbished in 2007 thanks to a cash boost of over £45,000 from the Department for Social Development.

It plays a hugely important role in the community. Since its foundation in 1973 it has gone from strength to strength thanks to the dedication of the many volunteers who give so freely of their time to help it run its services.

The Newry PIPS (Public Initiative for the Prevention of Suicide and Self-harm) was formed in 2003 after the death of Séamas McCabe, a 20-year-old student from Bessbrook.

At the beginning the group was formed with the understanding that survivors need a place they can share their feelings, thoughts and experiences. Part of the healing is in meeting others, who understand, can offer support, strength, and hope.

Since its inception the organisation’s focus has evolved in response to community needs and has become a one-stop shop and Protect Life Resource Centre for information and compassionate assistance for those in crisis.

On a shoe-string budget, the charity set-up a ‘Drop in’ centre to provide facilities for listening, counselling, therapy and training. It develops volunteers to provide assistance for those concerned about suicide and self-harm and carries out home visits to affected households within the local community

The recent attacks on the premises of the two charities has been condemned by Independent Newry City councillor Kevin McAteer, who described it as an “attack on the whole community”.

He said: “Both PIPS and Newry Gateway Club are very popular in our community and both do excellent work and should be commended not attacked by thugs. I call on anyone with any information to come forward.”