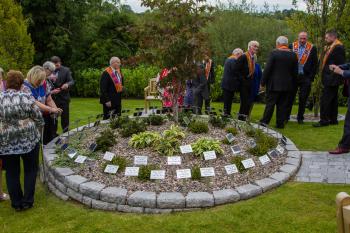 A Garden of Remembrance in tribute to 68 members of the Orange Order who were murdered during the Troubles has been officially opened in Loughgall.

The memorial garden – located in the grounds of the new Museum of Orange Heritage in Loughgall – remembers brethren, many of whom served with the security forces, who paid the ultimate sacrifice.

The dedication ceremony, which took place on Saturday afternoon, was attended by relatives of the deceased, as well as senior members of the Institution and a number of locally elected representatives.

County Grand Master of County Armagh Grand Orange Lodge, Denis Watson, welcomed the provision of the Garden of Remembrance as a “fitting tribute” to those who lost their lives as a result of republican violence.

He said: “This contemporary and permanent memorial garden offers a beautiful and tranquil space where relatives and friends can remember their loved ones and we are very pleased to have such an area of reflection situated within the Sloan’s complex. We trust the many visitors to our adjoining museum will also avail of the opportunity to pay their respects and learn more about the loss suffered by the Institution in Co Armagh during a turbulent period in the history of our Province.

“Over a fifth of all Orangemen murdered during the Troubles resided in Co Armagh and that number includes eight fatalities of the heinous IRA massacres at Tullyvallen Orange hall and Kingsmills. It was therefore particularly appropriate the praise for the dedication service should be provided by Tullyvallen Silver Band, given the occasion.”

Mr Watson expressed his appreciation to the former Armagh City and District Council for providing funding to the memorial project.

He said: “I would like to congratulate County Armagh Grand Orange Lodge for this respectful and poignant tribute to its murdered brethren. The Garden of Remembrance at Sloan’s House provides a peaceful place of solace for families and will allow visitors, and those from wider society, to reflect on the sacrifice of our members.

“The Loughgall garden greatly compliments the stain glass window unveiled earlier this year at the Museum of Orange Heritage in Belfast, paying tribute to all 332 of our murdered brethren. Both memorials serve as a permanent reminder of the painful legacy which terrorism inflicted on Orangeism during the Troubles. It is important that the innocent victims and their families are never forgotten.”

Cannabis factory arrests made in Newry and Portadown