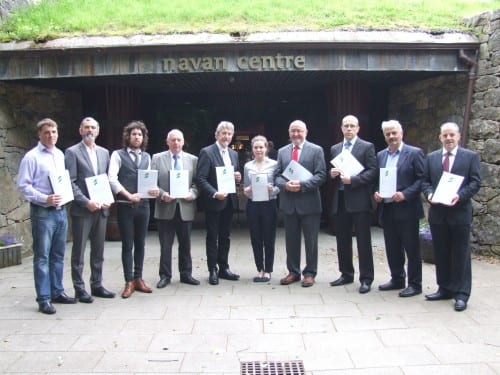 Opposition is m0unting against plans to construct a £250 million cross-border interconnector stretching from County Tyrone to Cavan.

And it certainly will not be a walk in the park for the applicants – SONI in the north and its southern counterpart EirGrid.

The latest considered objection has come from Sinn Fein, with a cross-border team making its own submission to the fresh bid to erect over 100 pylons – carrying high voltage power lines – across the countryside.

It would stretch from Moy across Armagh, Benburb, Killylea, Keady and Derrynoose before moving over the border – if approved that is. Objectors have until August 25 to submit their protests. Sinn Fein chose the historic Navan Fort to officially launch its submission, continuing its long record of calling for the project to be delivered underground.

MP for Newry and Armagh Mickey Brady said: “Sinn Féin’s position has been very clear from the very start, from the time that this project was first mooted.

“We recognise its importance to the island economy and to the safety and security of electricity supply in the north but, without a shadow of a doubt, this project is best delivered underground.

“Technological advances in recent years show that undergrounding is not only feasible but cost effective over the life of the project. It is certainly the best way to deliver this important infrastructure on time and on budget.

“This one move will address the full suite of genuine concerns, in relation to health, the local environment, heritage, agriculture, property and land devaluation for example, that residents and landowners along the proposed route have. Undergrounding makes absolute sense.

TD for Cavan/Monaghan Caoimhghín Ó Caoláin added: “Such is the scale of legitimate public opposition to the north-south interconnector project, as proposed, with overhead powerlines supported by gigantic pylons, that we are firmly of the opinion that this project is in serious jeopardy if Eirgrid and SONI don’t come up with an underground alternative. It really is a case of underground or bust.”