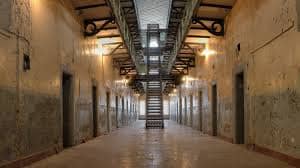 With plans to turn Armagh Gaol into a boutique style hotel as part of a multi-million pound development, Armagh Council has decided to stage more open days to allow the public access to the former women’s prison.

It is intended to stage one open day a month between April and June, with a review to be carried out in May about the possibility of extending it.

Previous such events have been met with huge public interest, and these will represent the last opportunities people will have to get a view of the Gaol before the major development proceeds.

At a recent committee meeting of Armagh Council, the Strategic Director of Regeneration and Development Sharon O’Gorman took councillors through a report on the matter.

Councillor Mary Doyle asked if the cost of open days outweighed the cost of individual tours and was informed that the costs of the open days included advertising expenses and it was anticipated these days would attract greater numbers.

Councillor Doyle then enquired what the position was in relation to requests for filming at the Gaol.

Ms O’Gorman advised that group visits of this specific nature would be encouraged to attend the open days where possible but that other requests may be considered.

It has been decided that a publicity campaign will be rolled out to increase awareness of open days.

It has also emerged that Fine Point Films, on behalf of producer/director Brendan Byrne, had contacted the council seeking permission to film in Armagh Gaol for a short ‘taster’, looking at prison protest – this will then be developed into a bigger project, a feature documentary international in scope.

The producer, who was given permission to film last month, needed to get generic/atmospheric shots in the evening – the reflection of fluorescent lights on the floor, metal steps, a door closing – which gave the sense of a prison, without the particular prison being identifiable.

The project will hear from academics and journalists across the world and is still in development, with production to begin in the summer of this year.