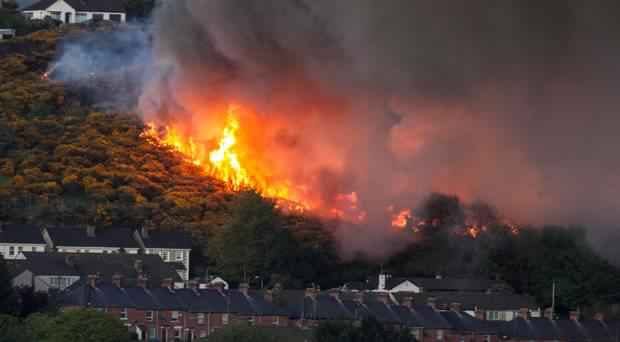 Firefighters battled more than 500 deliberate gorse fires in a single week last year – the majority in the Southern Area.

And as the warmer weather arrives, Northern Ireland Fire and Rescue Service is warning of the dangers and serious consequences and appealing for people to act responsibly

Between May 1 and 8 last year, firefighters tacked 511 gorse fires of which 466 were started deliberately.

NIFRS is reminding everyone that dealing with these types of incidents not only puts firefighters’ lives at risk but also the lives of everyone in the local community and puts additional pressure on operational resources.

“The current spell of dry, sunny weather is providing a tinderbox landscape with conditions ripe for gorse fires to take hold.  We have already dealt with the first gorse fires of the year in the last number of weeks so we are appealing to the public, and young people in particular, to help us by acting responsibly.

“Tackling gorse and wildland fires is extremely challenging for us. It means deploying firefighters and equipment to remote locations.

“This can be for a prolonged period of time with our Crews working under hazardous and intense heat to bring the fires under control. These fires can easily spread and even a slight change in wind direction can pose a serious risk to life, property and the environment.

“It’s not just the larger fires on hillsides and mountains that impact upon resources, the smaller fires involving grass and bushes also need to be dealt with quickly as they have the potential to spread and develop into bigger fires.

“Attending such incidents puts additional pressure on our people and our resources.

“Alongside partner agencies and community groups, we have been working hard to address the problem of gorse fires and educate people about the dangers and consequences of deliberate fire setting – the reduction in the number of gorse fires we have attended is testament to this work.

While the majority of gorse fires attended by NIFRS are started deliberately they can also be start unintentionally by thoughtless and careless behaviour.

Both deliberate and accidental fires can cost lives and NIFRS is asking that the public heed fire safety advice to protect themselves and the countryside.

* Report any suspicious behaviour to the police.