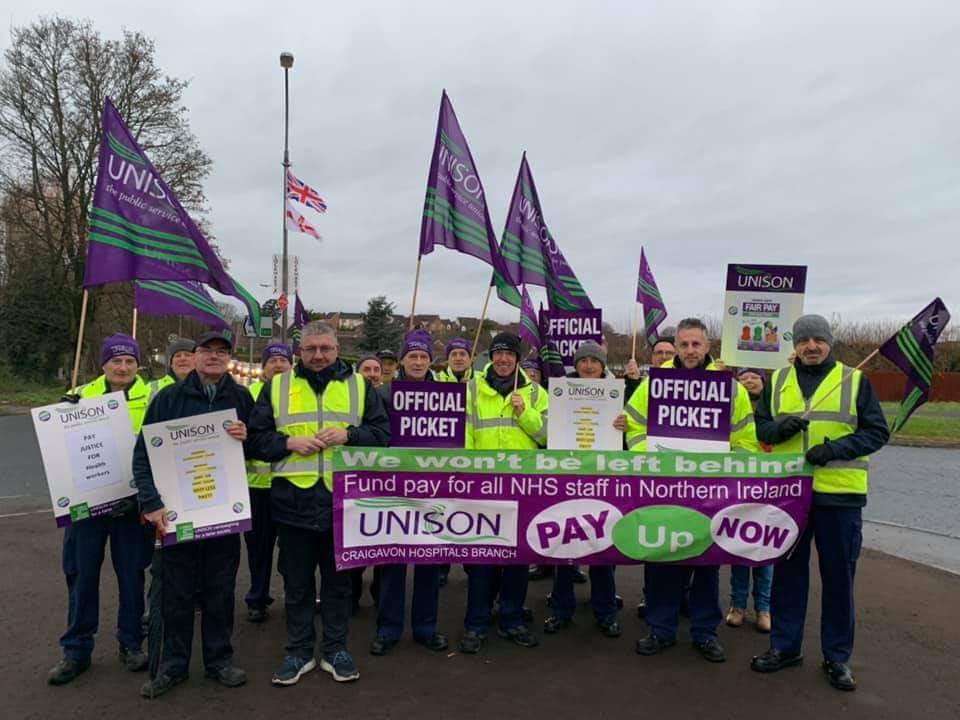 UNISON, the largest union in the health and social services system, has today (Thursday) agreed to ballot their members and suspend industrial action across Northern Ireland.

This morning UNISON’s Health Leadership met to consider an agreement in relation to the long running industrial dispute on pay parity and safe staffing in the health service.

The agreement was reached last night after many hours of intensive negotiations between the trade union group and the Department of Health.

“This Framework Agreement has been endorsed by the Minister for Health and restores pay parity with health workers in England with effect from 1st April 2019. It also sets out a funded framework for safe staffing.

“We are now balloting our membership with a recommendation to accept. Our industrial action is suspended for the duration of the ballot.”

Patricia McKeown, Regional Secretary said: “While we are heartened that our new health Minister and the Executive have kept their word, there are two groups in this society that really deserve the credit for getting us close to the resolution of this dispute.

“Our members have shown incredible determination and compassion and the public have been unswerving in their support.

“Over the past 7 weeks our 26,000 members in the health service have each played a crucial role in the action.

“Thousands of them have also taken direct strike action at great personal cost. Their action has not been easy. No one simply walked away and closed the doors behind them.

“Instead they have spent weeks engaging with their employers on the detailed work of ensuring emergency cover and protection for the most vulnerable patients.

“The public have supported them throughout, despite enduring thousands of cancellations in a health system bursting at the seams. They understood that someone had to call a halt to the rapid decline of our vital health and social services system. On behalf of all UNISON members I extend our heartfelt gratitude to them.

“That this dispute put incredible pressure on our elected politicians is without doubt. That it was cynically used as leverage by the UK Government is also self-evident.

“It has played a critical role in the return of devolved government and it has rightfully placed the health and wellbeing of the People of Northern Ireland back the top of the political agenda.

“We believe that we will have a positive response from our members.

“We are determined to get back to the core business of tending to the health needs of our people. This time we expect to be listened to and to play a full role in re-building our health service for the future.”