In Pictures: Official opening of Benburb Priory Library and Museum 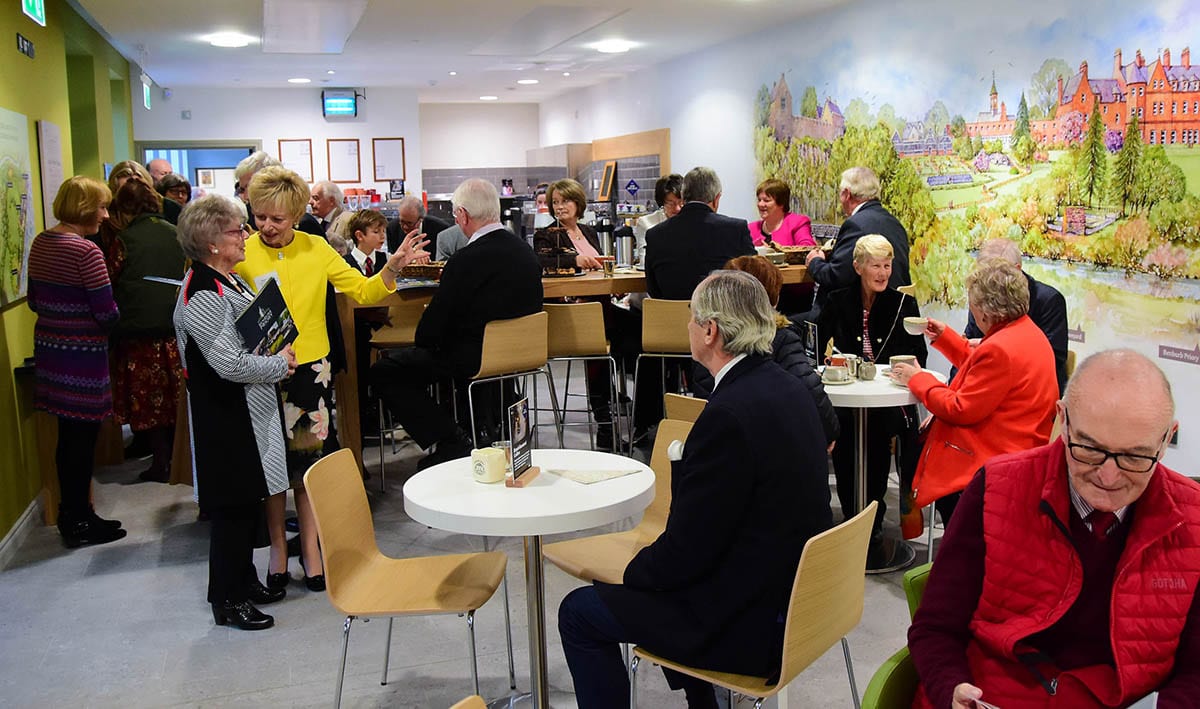 The Benburb Priory Library and Museum was opened officially by the two Archbishops of Armagh, Most Rev Eamon Martin and Most Rev Richard Clarke.

The £1.4 million development, is the result of detailed planning and fundraising over an 8-year period, and is based in purposefully refurbished accommodation (the Stables) at the centre of the Priory estate in Co Tyrone.

Celebrating over 1,000 years of local history, the new Library and Museum houses a number of unique collections including Servite, Marian and O’Neill collections and archives.

The development of the Library and Museum has been funded by: Heritage Lottery Fund , the Servite Province of The Isles, Friends of Benburb, Foyle Foundation, Garfield Weston Foundation, Ulster Garden Villages Ltd, All Churches Trust, and Dungannon and South Tyrone Borough Council.

The Servite Order, which owns the Priory and its estate, dates back to 1233 in Florence, Italy.

It has had a rich and varied history spanning and being affected by great political, religious and social change through its evolving locations in mainland Europe, England, United States, and beyond.

This resulted in considerable transfers of books, manuscripts and archive material from country to country.

As a result of various consolidations by the Servites in more recent times, the Priory at Benburb has, for a number of years, been home to two very extensive, but previously uncatalogued collections (Servite and Marian) of books, periodicals and Servite archival material unique to Britain and Ireland.

Some of the books date back to the 16th Century. There is also a collection of Irish literature and a wide range of general religious books. The archives date back over 150 years and include the complete records of the Servites in Britain and Ireland.

The above collections have undergone considerable conservation and are now catalogued for ease of access and study. They are complemented by the equally important and developing ‘O’Neill Collection’, which focuses on the association of the O’Neill Clans with Benburb and the rich local history including the ‘Battle of Benburb’, the Plantation of Ireland, development of the various strands of Clans of O’Neill and the O’Neill diaspora.

It also covers the development of the Priory estate (formerly Wingfield/Powerscourt estate) including its role as a field hospital in World War II, and the significance of the Blackwater valley in the economic, social and cultural development of the region over the centuries.

No similar collection devoted to the O’Neill Clans and associated history has been established elsewhere.

Benburb, by virtue of its history and association with the O’Neills, is the natural home for such a collection and the Library and Museum will be the future focal point for gatherings of the Clans including the recently re-established O’Neill Summer School.

The “O’Neill Collection” will include the incorporation of the extensive and highly valuable private collection of Hugo Ó’Neill. He is recognised as the present Chief by descent of the O’Neills of Clanaboy, by the Chief Herald of Ireland based at the National Library and by the Clans of Ireland organisation including the Association of O’Neill Clans.

He is domiciled in Setubal in Portugal. This will be complemented by the extensive ‘Irish collection’ which already exists in the Priory and by a commitment to a policy of expansion through relevant acquisitions.

The Priory, although owned and controlled by the Servites, is a cross-community centre and the Library and Museum has been developed in accordance with this ethos.

The Priory estate is itself of considerable historical interest. Originally a Wingfield/Powerscourt plantation estate, it was purchased by the distiller, James Bruce in the late 19th century.

Bruce built the current manor house and stables and remodelled Benburb village. After a period of relative disuse the estate was taken over during the 2nd world war as a field hospital for US, British and Belgian troops. It was purchased by the Servites in 1947 and opened as a Priory and seminary in 1949.

The Priory has evolved in functional terms over time and since the 1980s has been a major community centre and meeting place for over 30 community groups. It has over 20,000 visitors annually.

Fr Colm McGlynn OSM, Prior, said: “The development of the Library & Museum is a further extension of the community outreach which has been central to the Priory since its establishment in Benburb in 1949.

“It will enhance and broaden the experience and knowledge of visitors to the Priory, which is open to all.

“The Stables Coffee Shop will be a meeting place for visitors to enjoy a cuppa and a chat either before, during, or after, they visit the Priory house, the library and museum or the beautiful grounds of the estate.

“The Servite Community is very grateful for the funds which have made this important project possible and the hard work and dedication of the Project Team.”

Professor Gerry McKenna, Chair of the Library & Museum Management Board commented: “The Benburb Priory Library and Museum represents a major development not just for the Priory, Benburb village and the wider community, but also for the local, national and international community of individuals, researchers and groups (including schools and colleges) interested in the heritages represented within its collections.

“The establishment of the Stables Coffee Shop will also be a focal point for greater social interchange within the village and between visitors from near and afar.”

Heritage Lottery Fund contributed £773,000 to the project. Anna Carragher, Chair of their NI Committee added: “We are delighted to see the opening of the Library and Museum which allows the Priory to open up its wonderfully rich collections to the public for the first time.

“Many of the books within the collections had eventful journeys to reach Benburb so it is marvellous to see them conserved and protected but accessible in the beautifully restored Stables.

“A big thank you should go to players of the National Lottery who allow us to support projects like this.

“We wish the Library and Museum every success and encourage everyone to visit and use it to explore the rich heritage of the Priory and surrounding area.”