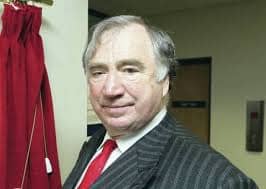 Norbrook Laboratories owner Eddie Haughey has been confirmed as one of the victims’ of the helicopter tragedy in Norfolk on Thursday evening.

The noted entrepreneur and politician – Ulster’s richest man – had been on board the aircraft which came down in Gillingham, near Beccles.

Emergency crews were called to the crash scene at 7.30pm.

A statement from the East of England Ambulance Service said: “Sadly, it is believed that four people in the helicopter are believed to have died in the crash.

“Ambulance resources have now been stood down from the scene. Our thoughts are with the family and friends of those who have lost their lives tonight.”

A spokeswoman for Norfolk Police said: “It’s a civilian helicopter, and there were four occupants on board who are all thought to have died in the crash.”

The helicopter had been en route to Northern Ireland at the time when it crashed, killing Mr Haughey – or Lord Ballyedmond – and three others.

He was educated at the Christian Brothers and married Mary Gordon Young in 1972, and the couple had two sons and a daughter.

Lord Ballyedmond had emigrated to the United States for four years in the 1960s, but returned home and founded a veterinary pharmaceutical manufacturing business in 1968.

He has been Chairman of Newry-based Norbrook Laboratories and Norbrook Holdings since 1980 and was also noted for his charitable support.

He also started an air travel business principally Haughey Air, Carlisle Airport (sold to WA Developments in May 2006), and a helicopter charter company.

The entrepreneur was the owner of Ballyedmond Castle in Rostrevor, County Down, and Corby Castle in Cumbria.

The founder and owner of veterinary pharmaceuticals giant Norbrook, Dr Haughey was included in the 2011 Sunday Times rich list and reported as having a personal fortune of some £650 million (€780 million).

On 1st July 2008 he was made an Honorary Doctor of Science (DSc) by the University of Ulster in recognition of his contribution to the development of the international pharmaceutical industry .

In his political life, Edward Haughey was nominated to the Seanad by the then Taoiseach, Albert Reynolds, in 1994, and nominated again by Bertie Ahern in 1997. He was a member of the Forum for Peace and Reconciliation and the British-Irish Inter-Parliamentary Body since 1997.

In 2004, he was made a life peer as Baron Ballyedmond of Mourne in the County of Down, and sat in the British House of Lords on behalf of the Ulster Unionist Party, before switching to the Conservative Party.

Church of Ireland Cathedral to host service in Irish

No court appearance for man in alleged sex slavery case