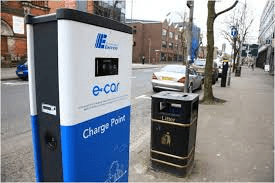 There are no plans to introduce any more ‘ecar’ charging points at parks across Armagh City and District, it has been revealed.

But those that are in place to date will be appropriately designated and policed to ensure that motorists may only use them if driving electric cars.

The information came to light in a recent letter from the Department for Regional Development in reply to correspondence from Armagh Council relating to plans for Tandragee.

It was revealed that an ecar charge point was strategically located in the town of Tandragee for a number of reasons, including its population size, proximity to amenities such as Tayto Castle and the local golf course, in addition to its access between the key urban hubs of Armagh, Portadown, Banbridge and Newry.

Originally the charge point was planned for location at the car park adjacent to Tayto Castle within Tandragee, but NIE experienced difficulty in obtaining a wayleave agreement in the area.

The ‘ecar’ project did not intend to install any further public charge points in the council area, but it proposed that those already installed were used more effectively by electric vehicles only.

With this in mind, the DRD sought Armagh Council’s support in introducing the appropriate legislation at the ecar spaces to allow them to be properly designated.

Roads Service had advised that Tandragee would not be routinely patrolled by traffic attendants, but in such circumstances they would respond to requests for enforcement of restrictions in the town, including the proposed ecar bay in Market Street.

It had also recently come to the Department’s attention that Tayto in Tandragee had purchased an electric vehicle as part of their business fleet and intended to make use of the public charge point in the town.

It was revealed that the Tandragee ecar point was first commissioned on  June 18 last year.  It was first used on October 1 and, between then and mid-Decemberr, and had been used a total of seven times.

The DRD said this reflected the upturn in usage which the Department was experiencing across the charging network.

The council agreed to reply to the DRD advising that it supported the introduction of appropriate legislation for ecar spaces to allow them to be appropriately designated.