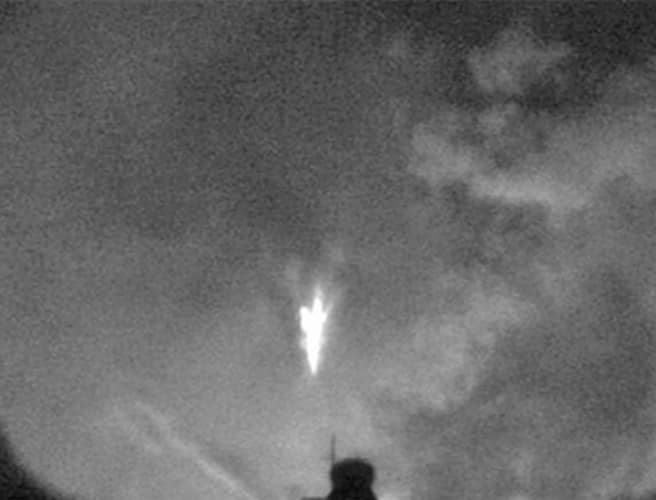 THE image above – captured on film over Armagh – has been revealed to be a rare phenomenon known as a ‘sprite’.

It is one of the very few observations from the UK and Ireland and has caused great excitement at Armagh Observatory.

It said the detection was made around the time of a thunderstorm over Dublin on July 24.

The images show the sprite – a carrot-shaped flash of light – rising high above the thunderclouds as seen from Armagh.

Sprites are associated with similarly powerful electrical fields that occur high above the clouds of the Earth’s atmosphere, often during particularly intense thunderstorms.

The rare flashes are observed at heights from around 50 to 100 km, in the middle part of the Earth’s atmosphere known as the mesosphere.

Because they are red and usually far away, to the naked eye sprites appear very faint and, like lightning, only last for a very short time – at most for up to a few hundredths of a second.

But they are very energetic phenomena and can measure up to several tens of kilometres across.

Their discovery in the late 1980s was unexpected, and only became possible when light-sensitive, surveillance-type video cameras were introduced.

The Armagh Observatory has used three of those cameras since 2005 to help study meteor activity in this region of the Earth’s atmosphere.

On  July 25, around 15 lightning flashes were seen over a two hour period, between 1am and 3am. It was at around 1am that the luminous, carrot-shaped sprite was recorded on video, which can be viewed on the Armagh Observatory website.

The Observatory’s John McFarland said its ground location appeared to have been at least 30 km from Armagh roughly towards the direction of Counties Louth and Dublin.

“It appears to be a typical ‘red sprite’, sometimes called a ‘carrot’ sprite owing to its distinctive shape,” Mr McFarland said.

“Apart from being extraordinary and awesome to behold, the relatively recent discovery of sprites reminds us that the Earth’s upper atmosphere remains a mystery, with a lot still to be learned about the environment of our own planet.”