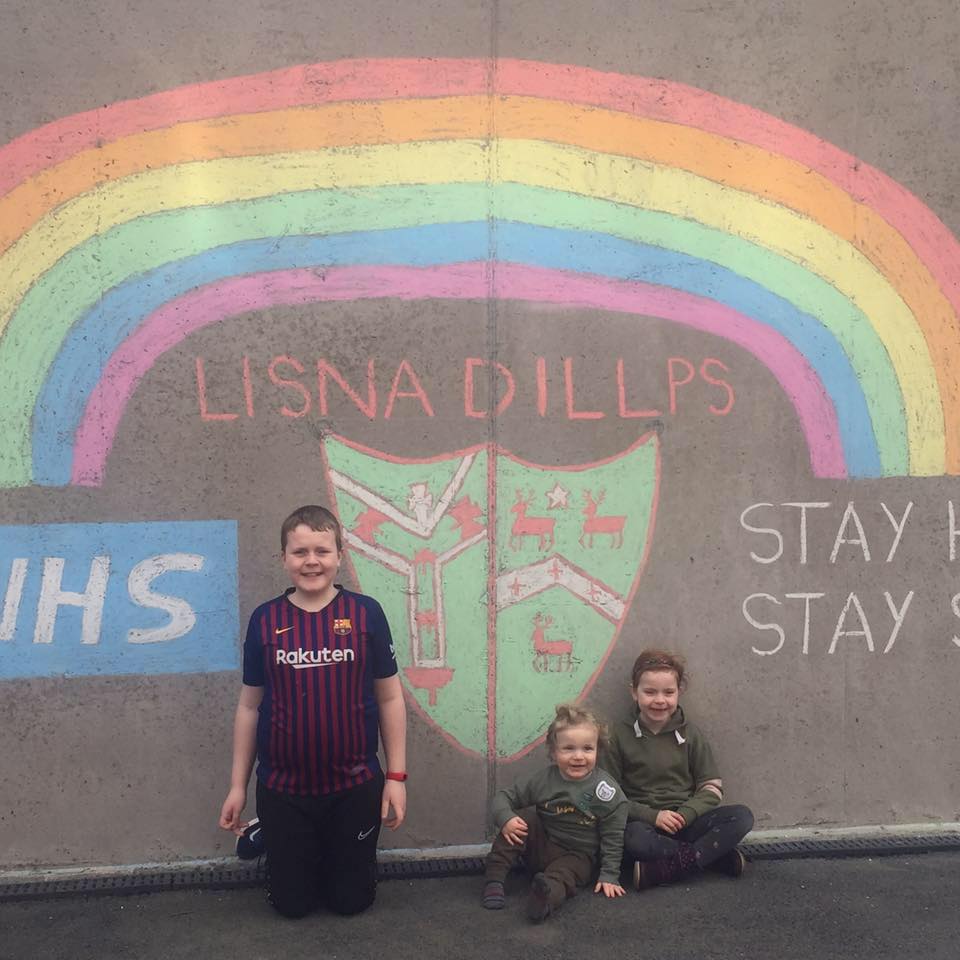 It is a tough time for everyone dealing with isolation but one Co. Armagh family is making the most of it – creating special memories along the way.

Pictured are the Hyde children from Newtownhamilton: James P6; Maggie P2; and Sam Hyde aged 2, with their very own Rainbow of Hope.

Speaking to Armagh I, their mother, Susan said: “The rainbow idea, that came from the school actually, Mr Savage, the principal at Lisnadill Primary School, has set a task for the children every two weeks and this was the first one.

“He wanted the children to put pictures in the window, but we live up quite a long lane and no one was going to be able to see it.

“So we have a big wall out the back of the house, I was looking out one morning and thought it would be nice there because we would see it every day.”

Susan said the children have been missing school “dreadfully”, so they thought about putting the school logo on it too.

“The loved it, especially James he was finding it tough missing school and his friends,” she added.

“My husband, David, he did the outline and they coloured it in, even the youngest Sam had the chalk out – he is only two – and Maggie loved the rainbow, she loves all the colours as a typical wee girl.”

The proud mum-of-three, with one more on the way, said the school have been fantastic during these unprecedented times and have been keeping in contact throughout.

Susan commented: “They are encouraging the children to do much more than schoolwork, make memories, as Mr Savage talks about, with your family and enjoy this time.

“It is hard for them, it is so hard to explain to them especially when you can’t fully understand yourself, but they have been brilliant, especially when they have had such upheaval, getting in to their routine, doing Joe Wicks in the morning, then into school work and having their break.

“They were asking what is for school dinner and calling me Mrs Hyde and everything, but I don’t think I am built to be a teacher.”

Susan said that the isolation has allowed the family to do things that they normally would not have been able to do.

She said: “I have never been a baker in my life but here I am baking buns with Maggie, and David is out with James power hosing and painting.

“Things that when children normally ask you, you would say you don’t have time, but we have all the time now, it is nice because you can see bonding in this upheaval.

“I just hope that when they look back at this period of time, at the moment, that they will have had plenty of fun and great memories”.