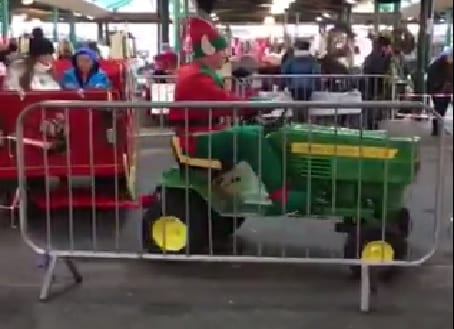 Improvisation is the name of the game at Newry’s Christmas Market.

And fair play to the guys for thinking on their feet. Only in Ireland would you see such ingenuity!

With stalls aplenty, there’s little room for much all else, but that didn’t stop these guys from having their own Christmas sleigh ride.

It’s not exactly a white-knuckle, adrenaline-fuelled, ride of your life…but it is for children after all.

The sleigh, pulled around by a sit-on lawnmower, is operating in a circumference of about five metres.

Absolutely brilliant improvisation! It put a smile on our faces!

This Sunday, December 11 its Newry’s Christmas Fayre & Family Funday for Autism, which runs from 11am to 4pm.

Get down and support a wonderful cause, even if the lawnmower ride isn’t for you!