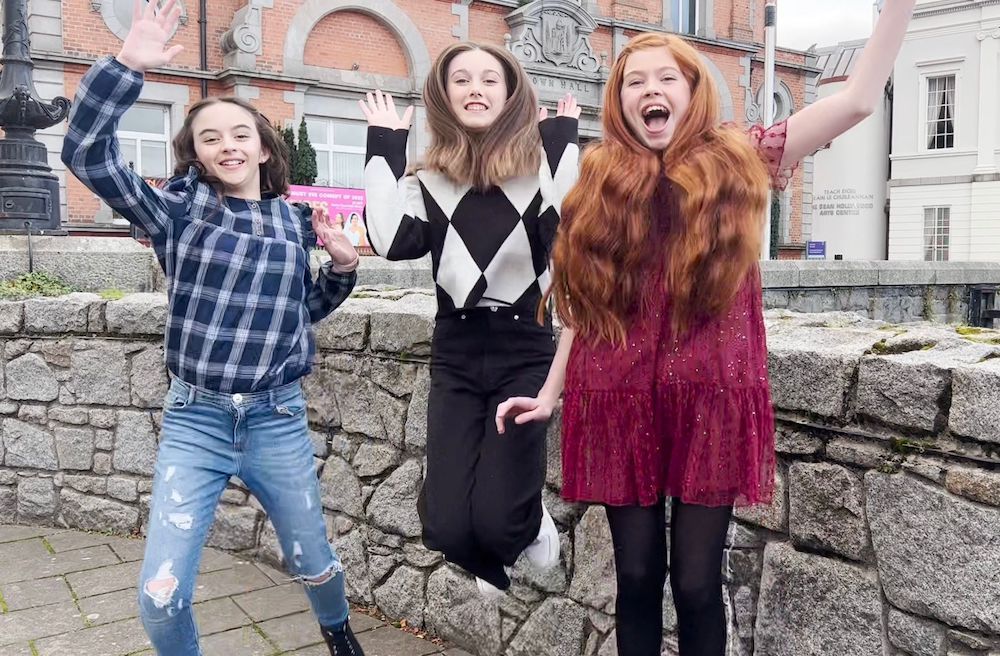 From 4,000 hopefuls, three teens from Co Down and Armagh have secured their place in the Final of Ireland’s Junior Eurovision Song Contest (JESC).

Following success in their respective heats, the Northern Ireland trio made it the Semi Finals aired on TG4 Sunday, October 16 where eight contestants were reduced to just three Finalists.

Singer Clare Keeley from Gilford, Co Down, Harpist and singer Niamh Noade from Lislea, Co Armagh and Mayobridge native Sophie Lennon now go head-to-head in the Final on October 23. One of the teens will go forward to represent Ireland at Junior Eurovision Song Contest in Yeveran, Armenia, on December 11.

The talented singers are all pupils at Flynn Performing Arts (FPA), Newry.

Director of Flynn Performing Arts Fiona Flynn said she was in a state of shock when judges named her three students as finalists.

“Throughout heats and televised shows, Clare, Niamh and Sophie have been amazing. They’ve had to learn new songs in Irish, which is a musical and linguistic challenge that they have all risen to. I am immensely proud that Flynn Performing Arts will now be representing Ireland on the world stage. It is a huge achievement for the girls and each is a winner in my eyes!”

Fiona – a triple First-Class graduate of the prestigious Royal Conservatoire of Scotland – founded Flynn Performing Arts in 2015 in Newry and since then the school has gained national recognition with students consistently obtaining the highest marks across the UK & Ireland in examinations.

“I am so thrilled and excited that from 4,000 hopefuls, Clare, Niamh and Sophie are the last three standing – I quite literally jumped off the couch watching the girls Semi Final success last night! I am so proud of them,” she adds.

Twelve-year-old Clare from Gilford is the youngest contestant. She says she was in “total shock” when her named was called out.

A student of Our Lady’s Grammar School Newry, Clare attends Blevins Academy of Dance and takes piano and violin lessons in school and is also member of the National Youth Choir of Ireland. She’s in her second year of training and management with Stagebox Elite team who contribute theatre actors to a number of West End shows including Annie, School of Rock and Matilda.

Clare is “very excited” to be selected for the Junior Eurovision Final and has embraced the challenge learning new songs in Gaeilge.

Niamh Noade – a third year student of St Paul’s High School, Bessbrook – is the first Harpist/singer ever to compete in the Junior Eurovision. Niamh has a multitude of accolades already to her name including NI BBC Soloist of the Year Finalist, Finalist at TeenStar UK, she is a County Fleadh and Scór winner, a member of South Armagh Traditional Arts Partnership and Vocal Ovation (Newcastle).

She has written and recorded her own songs and raised £5,000 for Children’s Cancer through a charity CD.

Niamh said that she is “loving every minute of it” but admits, “some of it is hard, especially learning the songs in Irish alongside learning the harp accompaniment”.

“Taking part in the JESC has really added to my confidence and I’m playing more contemporary music now too which I’m enjoying and I’d like to thank my harp and singing teachers for all their support and encouragement,” Niamh adds.

Sophie said: “I’m having the most amazing experience with the Junior Eurovision it is so much fun and I have made lots of new friends also. I’m really excited now for the Final!”

This year, the Sacred Heart Grammar School (Newry) student was also named BBC School Soloist 2022 and was a semi-finalist on Britain’s Got Talent. Sophie was chosen as the star of new West End musical ‘Marnie and the Kaleidoscope’ which takes to the stage 2023 and earlier this year appeared in an ITV Children’s series ‘Ted’s Top Ten’.

Now in its 20th year, Junior Eurovision is a huge opportunity for the young hopefuls to showcase their unique singing and musical talents on a global stage. Fiona Flynn concluded: “I can’t wait to see my three girls side by side on stage for the Final. Junior Eurovision will give them such a huge platform. To date, over 40 countries have competed in two decades, but there’s never been an Irish winner.

“Wouldn’t it be amazing if one of these young women could be the first.”