Margarita McGivern from Newry is supporting the Stroke Association’s ‘Hope After Stroke’ Christmas appeal, following the support she received from the charity 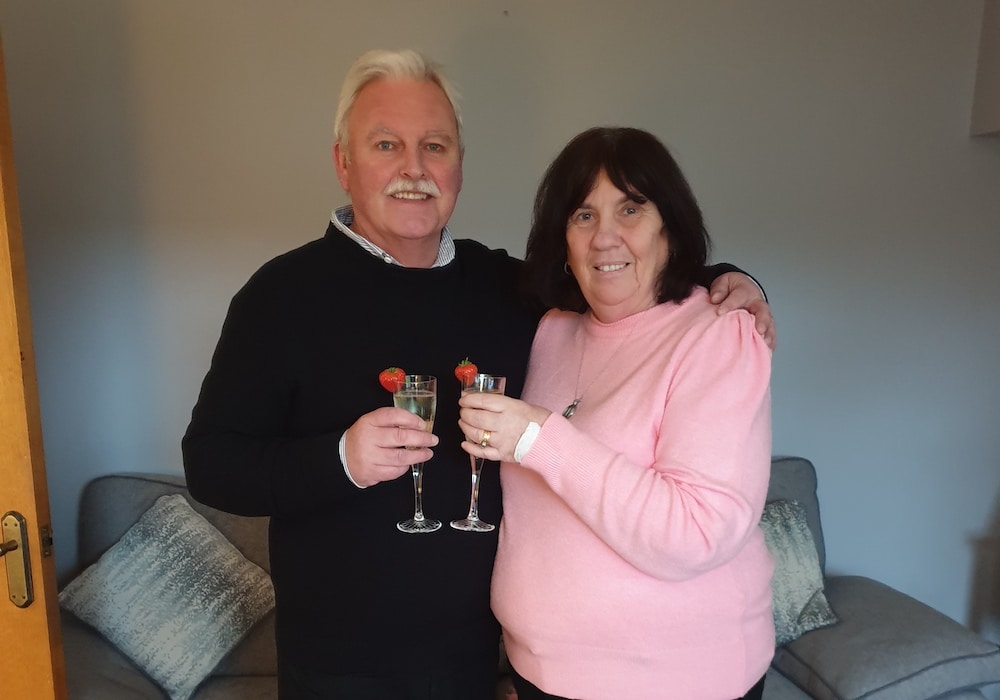 Margarita McGivern with her husband Eddie

A Newry woman was left speechless and weak after suffering a terrifying stroke while on holiday in Turkey last year.

Margarita McGivern, 63, was holidaying with husband Eddie in July 2019 when the unthinkable happened.

Fortunately Eddie – her rock – was able to call for a doctor, and following a brain scan, they were told that Margarita had suffered a stroke. After only one night in the hospital, Margarita was sent back to the hotel room for bed rest.

Margarita explained: “Immediately after my stroke I had lost my speech. I could just about say the words yes and no. I know it was very frightening for Eddie being stuck in Turkey amongst strangers, with me so ill and not really knowing what to do for the best.”

However, a few days later the local doctor told them that Margarita was stable enough to take the flight home.

They were met by their son and daughter at the airport and went straight to Daisy Hill Hospital, Newry, arriving at 2am in the morning.

Margarita then stayed in hospital for a further week where she underwent extensive scans in Daisy Hill and Craigavon.

Margarita was left with weakness on her right side and problems communicating (a condition known as aphasia which can affect around a third of stroke survivors). But once home, Margarita had 12 weeks of speech therapy.

Margarita continued: “At the start I just couldn’t say anything to Eddie and the family but yes and no. I was determined to get better but it was so hard. I’d sit and practice new words over and over again.

“She then produced a book and asked me to name everything I could see in the book. And I did it. The penny dropped then that I’d be able to speak again if I just kept working at it.

“At the beginning of 2020, I’d started to go to a Stroke Association Communication Plus support group in Altnaveigh House in Newry. It helped me so much. It was so good to be able to share what I was going through with others who could understand.

“But in March when the Covid-19 lockdown started, it knocked me back a bit. Not being able to get out or to see anyone really did affect me badly and my recovery did suffer for it.

“Around that time the team from the Stroke Association asked if I’d be keen to try their ‘Here for You’ project. I was matched up with someone else who’d had a stroke so we could keep in contact over the phone. Helen spoke to me every week for 12 weeks and it was just wonderful.

“Because Helen had had a stroke a few years ago, she knew what was ahead of me and was in a better place to support me and tell me things I just didn’t know.

“Helen is now a very good friend to me. I couldn’t have found a nicer person. Helen’s helped me so much even with smaller things like recommending a kettle that I don’t have to lift to pour as I’ve weakness in my right hand.

“Life is different now. After my stroke, I was so afraid I wouldn’t be me again. It’s been hard on me and Eddie and the family but I now know that with hope I can get there.

“The Stroke Association have been there throughout my journey so far and they’ve been a great source of support. This Christmas, I’d encourage everyone reading this to consider donating to the Stroke Association so they can continue to support stroke survivors like me to rebuild their lives after stroke.”

Margarita is asking people to make a donation to the Stroke Association’s work supporting survivors and their families, as they rebuild their lives this Christmas.

The Stroke Association’s Head of Services in Northern Ireland, Ursula Ferguson, said: “When someone’s life has been shattered by stroke, they may feel all hope is gone. But we also know that stroke survivors cling onto even the smallest glimmer of hope.

“This is what powers them on to achieve what many thought would be impossible. From my time working at the Stroke Association in Northern Ireland, I’ve heard so many stories of remarkable people making recoveries even 20 years after their stroke.”

The charity estimates that there are nearly 39,000 people living with the effects of stroke in Northern Ireland, while around 4,000 people have a stroke every year.

“This pandemic has had a serious impact on our ability to raise funds through our usual community events and activities. Many people in our support services have praised the support they received from the Stroke Association, to build on that first glimmer of hope so that they could rebuild their lives after stroke.

“Hope might be found in a call to our Helpline; through the friendship and support of our online community; or the ongoing support of our Stroke Association Support Coordinators. Rebuilding lives is impossible without hope. And that’s why we’re asking everyone across Northern Ireland to donate to the Stroke Association and help give someone the gift of hope this Christmas.”

To donate or for more information about stroke and the vital role that hope plays in stroke recovery and rebuilding lives, please visit www.stroke.org.uk/hope