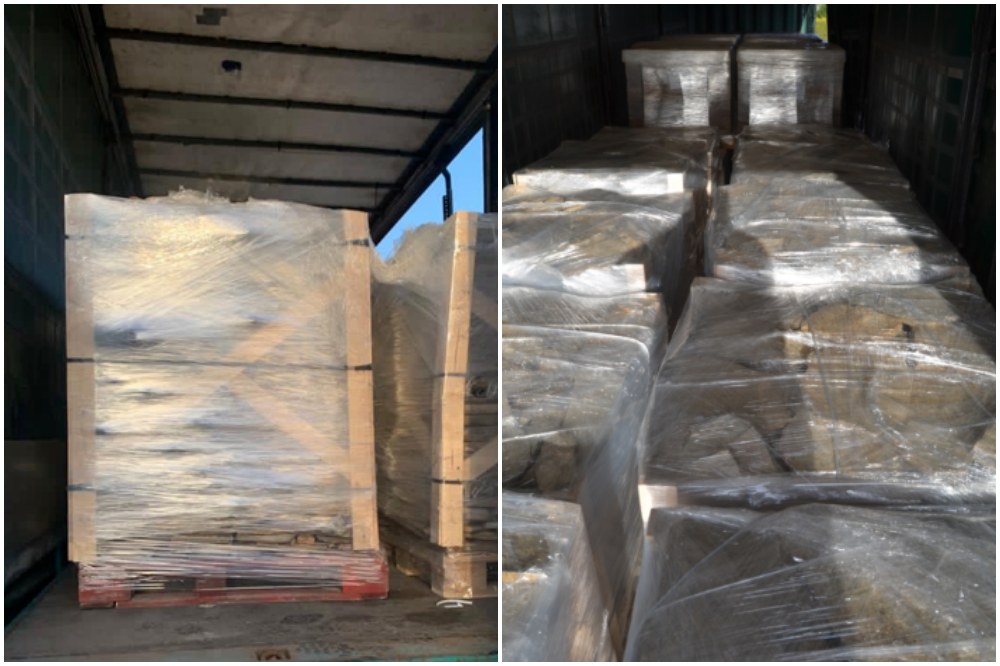 The managing director of a Newry based haulage firm appeared in court today (Thursday) accused of importing one of the largest ever cannabis seizures into Northern Ireland.

Banbridge Magistrates’ Court, sitting in Newry, heard that while officers uncovered 750 kilos of herbal cannabis hidden in boxes of tiles in the trailer of a lorry which belonged to 34-year-old Gary McGeown, police also found empty tile boxes in the yard so they believe there had been an earlier shipment.

The mammoth seizure, the court heard, is estimated to be worth up to £10 million pounds.

McGeown, from the Belfast Road in Newry and who appeared at court by videolink from police custody, confirmed that he understood the five drugs against him accusing the married father-of-three of importing cannabis, simple possession and possession of the class B drug with intent to supply on March 30 this year and two counts of being concerned in making an offer to supply cannabis between 30 March and 16 April last year.

During a contested bail application, prosecuting counsel Robin Steer told the court it is the police case that McGeown, the managing director of McGeown Logistics haulage firm, “is involved in the shipment of large quantities of drugs, as is evident from this find.”

He continued there were objections to McGeown being freed on bail due to fears that he would interfere with the ongoing police investigation and also that despite having a clear criminal record, “he would’ve had to outlay several million pounds with regard to this shipment so there’s a risk of further offences that he will have to somehow make up this very significant financial loss”.

Mr Steer outlined that while the first three charges relate to the cannabis seizure in McGeown’s haulage yard, the charges from this time last year relate to “encrypted phone data which we say can be attributed to the defendant,” adding that those messages discuss a 300 kilo cannabis shipment.

The court heard that during searches of both McGeown’s home and that of his mother, numerous electronic devices and mobile phones were seized for examination and that although the encrypted handset was not recovered, three BQ chargers for such a handset were found.

“Essentially we say that as well as the drugs find in the yard, that he can be connected to encrypted phone data that was authorised under a Targeted Equipment Interference Warrant…which allowed the French authorities to get that data,” said Mr Steer, explaining how that data was then passed to the NCA and to the PSNI.

He claimed McGeown could be linked to the encrypted data due to the content of some of the messages in that in an exchange with another user he allegedly refers to “the quarry’s busy, the lorries doing nothing” and send another user a photograph of a text exchange from a normal phone where a lorry driver explains to a ‘Gary’ that he is stuck in Russia due to a lockdown. McGeown, the court heard, had a driver stuck in Russia and he also owns and operates a quarry.

Mr Steer further revealed that the “geolocation of the encro handset shows it’s being used in the BT34 area and that would include his yard and house.”

Defence counsel Joseph O’Keefe confirmed with Detective Constable McBurney that McGeown had been “fully cooperative” with the police investigation, had answered all their questions, given officers full access to his haulage yard on the Rathfriland Road and lists of all employees.

He submitted that with a package of bail conditions, including a £30,000 cash surety available, the court could have “trust and confidence” that he would abide by those conditions.

Describing the offence as amounting to an “extremely sophisticated international operation,” Deputy District Judge Trevor Browne said he was satisfied that the “stakes in this case are so high that there must be every incentive for anyone charged…to cover their tracks.”

He said he was refusing bail due to the risk of the investigation being obstructed and remanding McGeown into custody, adjourned the case to April 28.