Four fantastic charities supported thanks to ‘Run for Raff’ event 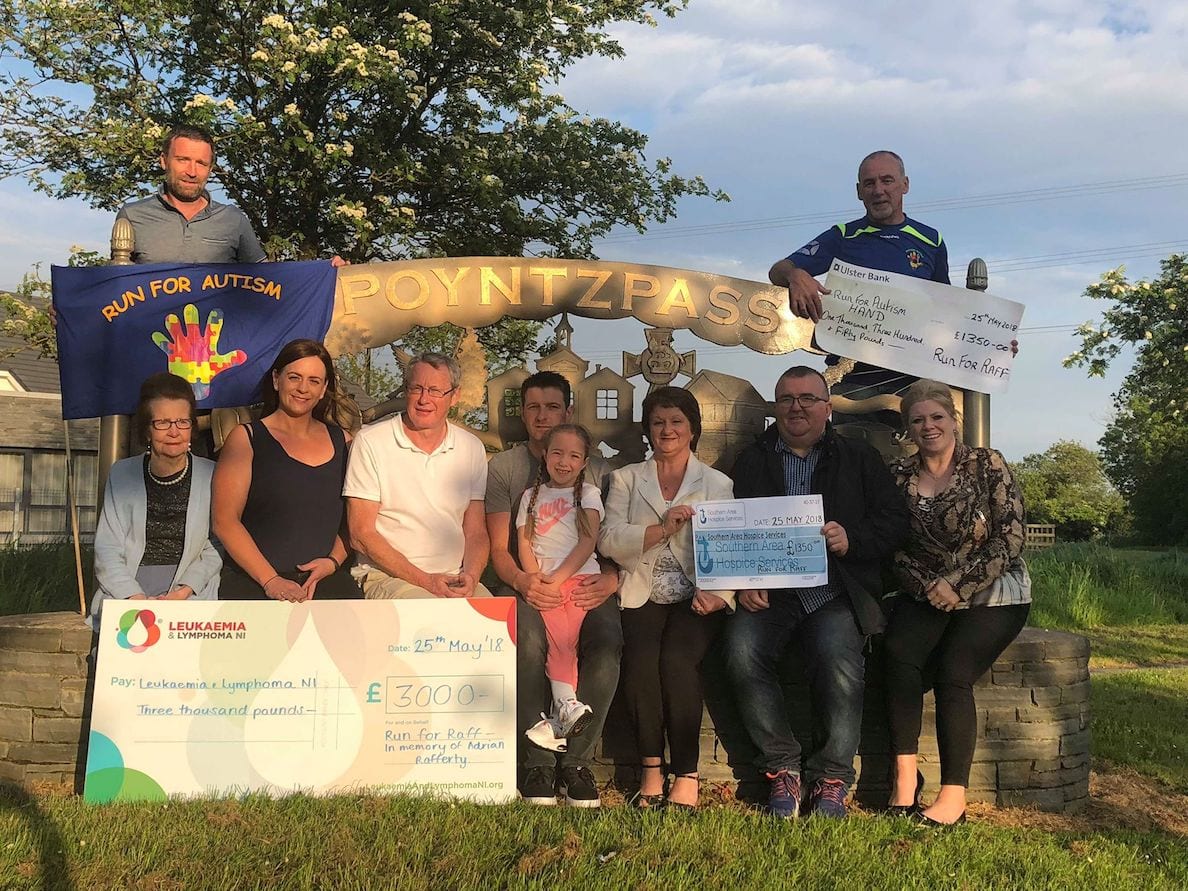 Co Armagh group ‘Run for Raff’ has donated funding to four charities following another successful event in memory of local lad Adrian Rafferty from Lissummon, who lost his battle to Leukeamia in 2014.

A fantastic sum of £6,130 was raised this year thanks the group’s annual 10k/5k run and 3 mile family walk.

The event was attended by over 500 runners and walkers from across Newry, Mourne and Down and Armagh, Banbridge and Craigavon Council districts.

To date ‘Run for Raff’ has raised over £54,000 and all proceeds have been donated to a range of charities over the last four years, all thanks to the support of the public.

Claudine Rafferty, Chair of the fundraising group said: “I’m delighted and privileged to be able to support so many charities this year knowing that the money will go a long way in helping to make a difference, to so many lives, in many different ways.

“I want to wholeheartedly thank everyone who took part in the event this year, to the kind sponsors and help from local businesses, as well as family members, friends and the volunteers who helped us – without our volunteers the event wouldn’t have happened and the charities wouldn’t have benefitted.”

This year’s chosen charities benefitting from all the proceeds are Leukaemia Lymphoma NI; Run for Autism HAND, Southern Area Hospice and Shine NI (a charity supporting those living with Spina Bifida and/or hydrocephalus).

Joanne Badger from Leukaemia & Lymphoma NI added: “Three people in Northern Ireland are diagnosed with blood cancer every day making it the 5th most common cancer in the UK by diagnosis and the third biggest cancer killer.

“This frightening statistic is a stark reminder that although research has come a long way, the outcome for many blood cancer patients’ remains poor and more work must be done.

“We are the only charity in Northern Ireland dedicated to blood cancer research, they operate with the main objective of improving quality of life and survival rates for blood cancer patients.

“All funds raised remain in Northern Ireland to support the clinicians, scientists and students researching these diseases. None of this would be possible without the continued support from the public at events like Run for Raff and we are so grateful for their ongoing support.”

“Adrian Rafferty was very much part of us from we started and he did a lot for charity in his life and his legacy lives on. To have received £1350 in his name therefore means so much to us.

“A big thanks to Claudine Rafferty, Donal McCoy, Jacqueline Rafferty and team and to everyone who took part in this fantastic event.”