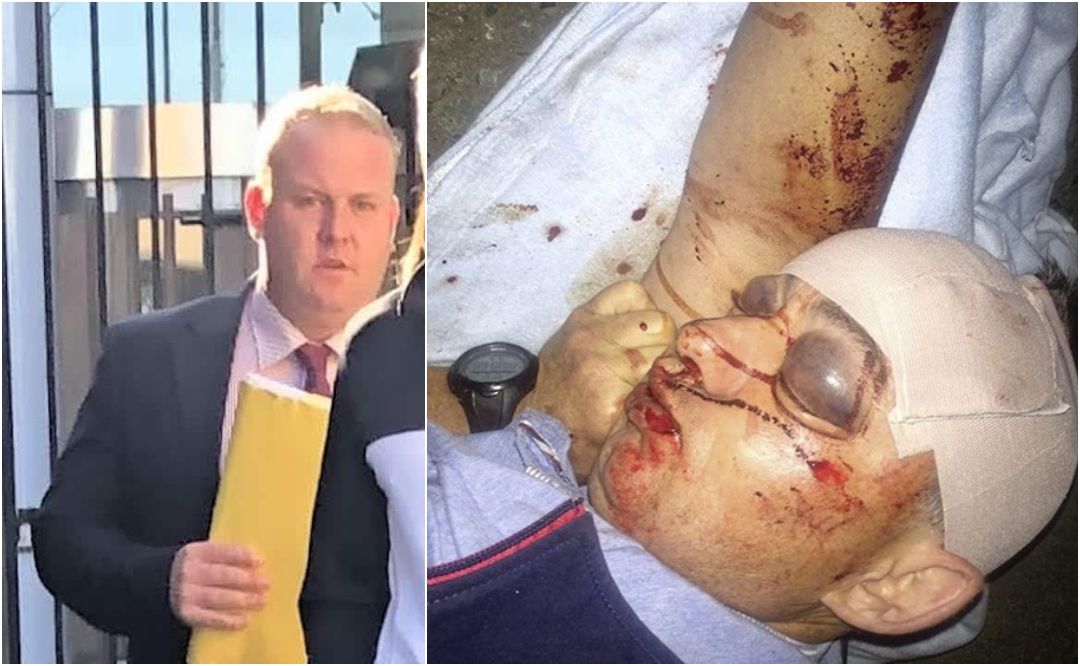 Gary chambers leaving court on an earlier occasion (left) and victim Pascal Morgan (right) taken by his family at the time.

A County Down man who left his victim with multiple facial fractures narrowly escaped going to jail today (Monday) after a judge decided to suspend his prison sentence.

Imposing a three year sentence on haulier Gary Chambers at Newry Crown Court, Judge Gordon Kerr QC told the 36-year-old “with some considerable hesitation I consider that this is a case where the court could exercise some clemency” so he was suspending the sentence for three years.

Describing it as a “substantial sentence,” he warned the father-of-three if he reoffended he would go to jail so “it’s entirely in your hands whether you have to serve that three year imprisonment.”

Last March Chambers, from Sabbath Hill, Ballymartin, admitted causing Pascal Morgan GBH “contrary to section 20 of the offences against the person act” and attempting to cause criminal damage to gates and doors at the Kilmorey Arms Hotel in Kilkeel on July 14, 2019.

Following his admissions two other charges of robbing Mr Morgan of his wallet which contained £150 and 450 Euros and making a threat to kill his victim, were left on the books and not proceeded with.

Summarising the case during his sentencing remarks today, Judge Kerr described how both men had been drinking separately in the Kilkeel hotel when Chambers “approached the table the injured party was at and began to shout and make accusations against him”.

Mr Morgan did not react and Chambers was taken out the back door by bouncers where he can be seen in CCTV kicking the rear gate, resulting in the attempted criminal damage charge.

A short time later, 49-year-old father-of-two Mr Morgan was captured in CCTV “stumbling” down the street towards a cash machine, kicking at closed shutters as he walked.

Judge Kerr said that according to the prosecution case the two men met and Mr Morgan swung a punch at Chambers but missed and the defendant then reacted by punching the 49-year-old who was knocked to the ground.

He said it was clear that Mr Morgan’s injuries, which amounted to fractures to his nose, cheek bones and left eye socket along with a bruise to his brain and skull fractures, “were caused by the defendant”.

Chambers was arrested a short distance away but refused to answer police questions and Judge Kerr told the court the PPS accepted his guilty pleas because there was no evidence of him using a weapon or of “excessive stamping or kicking while the victim was on the ground.”

He revealed that according to a victim impact report, Mr Morgan was off work for 18 months and suffered mental distress in addition to his physical injuries which had left him “scared of going out.”

The judge said while there was a “high level of injury,” Chambers’ culpability is “at most, medium” so taking aggravating and mitigating facts into account, the proper sentence would be three years.

Judge Kerr continued however that he had defence medical reports which showed that Chambers’ wife suffers from a “long standing and extremely serious condition” so to send him to jail would have an adverse impact on his three children.

The judge said there had been an offer from the defendant to pay £500 compensation to Mr Morgan, not for his injuries but rather in relation to the allegation that he lost money at the time of the incident.

He made a compensation order in addition to the suspended jail sentence.