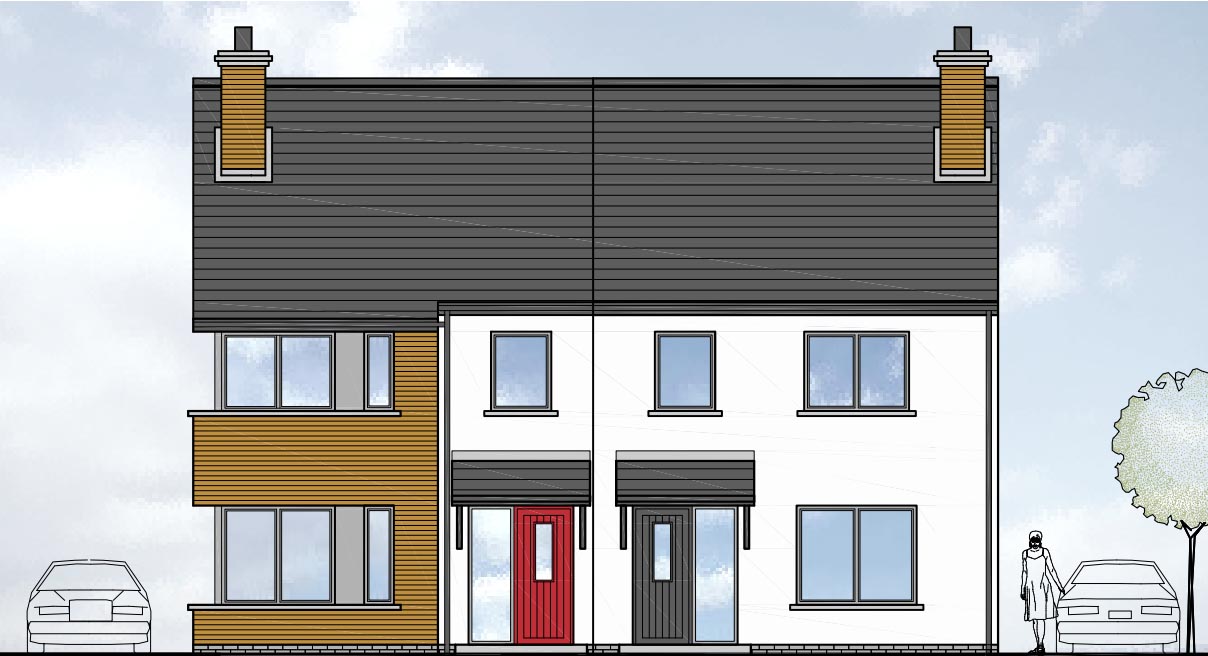 Front elevation of one of the planned house types

Plans for a controversial housing development in Newry – which attracted over 860 objections and saw a public protest staged over the summer – have now been given the go-ahead.

The scheme – estimated to cost close to £2 million, according to CIS, and situated close to Damolly Retail Park – will consist of a total of 27 properties.

The approval comes almost four years after the proposals being first drawn up. Although amended proposals were later brought forward, the number of properties has not changed.

The development will be a mix of house types and includes two apartments.

An application for the work – in the name of PJ Burns – was submitted to Newry, Mourne and Down District Council back in the spring of 2016.

The site in question is to the north of an area known locally as Hickeys Loanen. It is described as being a field, which is located to the south of the towpath to Bessbrook River/Newry Canal and east of Damolly Retail Park.

With the new homes will be included associated siteworks and drainage.

And there will be road access from Drumgullion Avenue, a residential address from which many of the 865 responses have originated.

Among the many reasons for objection are that it would “have adverse environmental effects” and a “detrimental impact on the established nature and character of the neighbourhood”.

There have also been “safety concerns” over the “sharp increase in traffic”.

According to a design and access statement submitted with the proposals in April 2016, the development is sensitive to the area.

It states: “The design of the layout has been carefully considered to avoid overlooking of any of the existing dwellings in the neighbouring developments.

“The scale, type and massive of the proposed dwellings is also sympathetic to the existing dwellings.

“The proposed dwellings are to be two-storey relating to the scale of the dwellings in the surrounding areas.”

It says the essence of the development is its “overall openness”.

The statement adds: “It is not simply a development with singular access point. The existing gravel lane is, in a sense, ‘adopted’, transformed and involved within the proposed development.

“Pedestrians using the gravel lane are now offered alternative routes into and through the site, with increased variety and interest. The gravel lane is no longer a ‘lone’ element leading to the towpath. It is effectively part of the proposed housing development, both contributing to it and benefiting from it.”

The statement says the proposed development enables more access from Drumgullion Avenue to the towpath and also to the land to the west of the site, described as a “site of local conservation importance and area of constraint on mineral developments”.

Despite the hundreds of objections, council has recommended approval.

An official reported: “Whilst the access arrangement will offset on street parking provision this has been compensated by a new parking area for existing residents within Drumgullion Avenue.

“As well as this, the development has been well designed to ensure that there is an adequate pedestrian link to the existing footway network which will only encourage sustainable patterns of movement.

“Overall, proposals are acceptable in principle, objections fully considered, and no major concerns have been raised by consultees.

“Proposals meet the requirements of planning policy and on this basis, it is recommended to approve the application.”